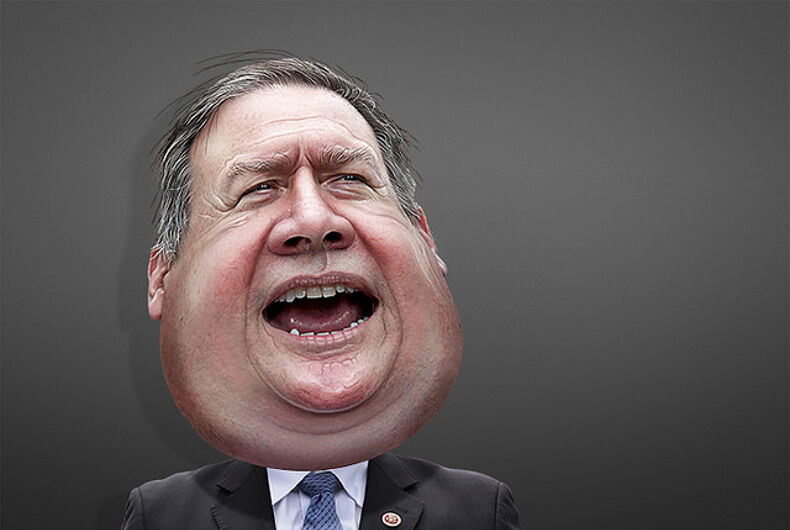 President Donald Trump has ousted now-former Secretary of State Rex Tillerson and announced he will replace him with former CIA Director Mike Pompeo. Pompeo will be replaced by Gina Haspel, Pompeo’s current deputy.

The State Department was already not on the side of LGBTQ people, but with Pompeo, who was formerly a member of the House of Representatives for Kansas’s 4th congressional district, there is even more reason for trepidation.

Tillerson was not welcomed with open arms by LGBTQ advocates either, having run a company, in ExxonMobil, that has been sued for its alleged anti-LGBTQ hiring practices and its lack of protections on the basis of sexual orientation and gender identity. His time in the White House was mixed at best, failing to speak out on reports of increased human rights violations. Tillerson eventually raised the issue of the reported anti-LGBTQ purge in Chechnya with Russian officials, having failed to do so in early meetings. Granting visas for those fleeing those abuses has been another matter, however.

So while it is not too sad to see Tillerson go, it is no better to see Pompeo enter. Here are the secretary-designate’s most anti-LGBTQ moments.

Pompeo opposed the repeal of Don’t Ask Don’t Tell (DADT) in 2010, as GLAAD reports, arguing that “when you enter the army you give up a few of your rights.” In 2011, while speaking at the Values Voter Summit, shortly after DADT was repealed, “we cannot use military to promote social ideas that do not reflect the values of our nation.”

The former CIA director and House representative has been one of the most vocal opponents of marriage equality, fighting it even after the 2015 Supreme Court ruling making it the law of the land. He called that ruling “a shocking abuse of power” that “flies in the face of centuries of shared understanding of our Constitution.”

Pompeo co-sponsored the State Marriage Defense Act, an attempt to place the state’s anti-marriage equality laws ahead of federal law.

In addition to not wanting to see same-sex couples get married, Pompeo has made clear that he is not in favor of same-sex parenting as compared to the “ideal” of opposite-sex parenting.

“I think as you look back at civilization, look back at history, you find the strength of these families having a father and a mother is the ideal condition for childbearing,” Pompeo said during a 2014 interview. “Doesn’t mean there aren’t great families with single parents, great young men and women raised without either parent. If you’re asking for what is ideal, I think it’s being raised by a man and a woman.”

4. Introduced legislation to give religious people a “license to discriminate”

Pompeo also co-sponsored the Marriage and Religious Freedom Act, to give religious people a “license to discriminate” against the LGBTQ community and others, so long as they could cite their beliefs in so doing. The legislation is similar to the First Amendment Defense Act (FADA), recently reintroduced in Congress. The Trump administration has already shown they are in favor of such legislation.

Pompeo opposed reauthorizing the Violence Against Women Act due to language expanding the law to cover LGBTQ people.

The vote was to amend “he Violence Against Women Act of 1994 (VAWA) to add or expand definitions of several terms used in such Act, including…underserved populations” as populations that face barriers in accessing and using victim services because of geographic location, religion, sexual orientation or gender identity.”

6. Canceled a planned speech at the CIA about diversity and LGBTQ rights

As acting CIA director, he cancelled a planned speech about diversity and LGBTQ rights, to be given by Judy and Dennis Shepard ,the parents of Matthew Shepard, whose murder drew global attention and for who is the partial namesake of the country’s federal hate crime law.

The Shepards are the founders of the Matthew Shepard Foundation.

Sources said the cancellation “left employees disheartened — particularly those invested in the diversity reforms that were emphasized during the tenure of John Brennan, the former CIA director.”

It is for these reasons that LGBTQ advocates are decrying the choice of Pompeo to lead the State Department.

“Mike Pompeo’s longstanding opposition to LGBTQ equality makes him a reckless choice to lead our nation’s diplomatic efforts,” said HRC President Chad Griffin. “The decision to nominate anti-LGBTQ Mike Pompeo could have serious consequences for the United States and LGBTQ people around the globe. The State Department has a crucial role to play in advancing human rights — a role which was already rapidly declining under Tillerson. This decision has the potential to make a dire situation even worse. Pompeo does not deserve to be confirmed.”

“We have already seen a State Department under President Trump that has stayed silent and refused to take necessary steps to combat and condemn the growing epidemic of anti-LGBTQ violence around the world, and now that department will be helmed by someone with an extensive anti-LGBTQ record,” said GLAAD President and CEO Sarah Kate Ellis. “During his time in the Trump Administration, Mike Pompeo has personally consulted with Family Research Council, an anti-LGBTQ hate group that supported Uganda’s efforts to punish and execute LGBTQ people. This extremism should have no place in the U.S. State Department.”

What can hip hop & Oprah teach us about dealing with Trump?