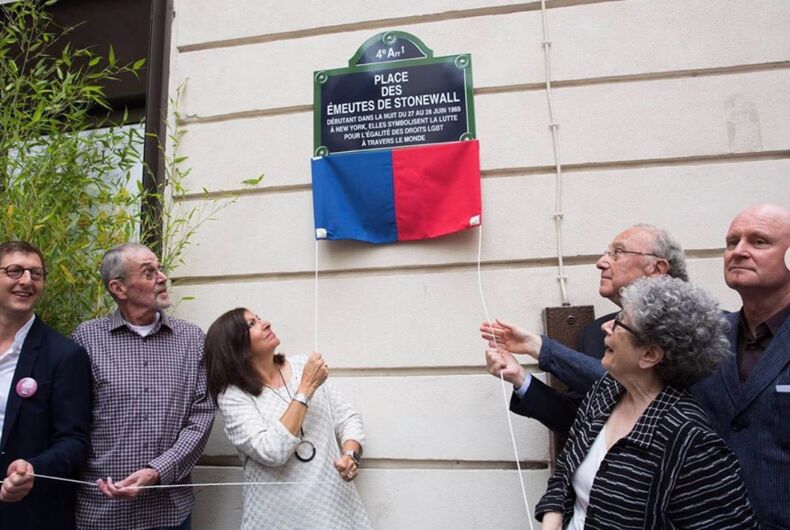 Honored by the city this year is Harvey Milk, Pierre Seel, Ovida Delect, and Gilbert Baker. The four new additions add to more than 40 LGBTQ people so honored since Hidalgo was elected in 2014.

Baker’s plaque also resides in yet another location renamed this year: the newly-christened Stonewall Riots Square.

Harvey Milk, of course, was a member of the San Francisco Board of Supervisors, and the first openly gay elected official in California. He was assassinated, along with Mayor George Moscone, by former Supervisor Dan White in 1978.

Ovida Delect was a French transgender women who was part of the French Resistance during World War II. She was deported to a German concentration camp during the war, but survived. She passed away in 1996.

Pierre Seel was a gay Holocaust survivor and testified openly about his experiences after the war. Seel passed away in 2005.

Finally, Gilbert Baker designed the rainbow flag, unveiling his design in June of 1978. A longtime activist, Baker passed away in 2017 after seeing his idea become a worldwide icon for equality and civil rights.

Neither Baker nor Milk have the strong ties to France that Seel and Delect have, but their importance to the LGBTQ rights movement worldwide led to the honor.

Mayor Hidalgo has made it a mission since 2016 to make Paris a visible supporter of LGBTQ people. Her regional councilor, Jean-Luc Romero, has been her right-hand man in this effort. Romero made 52 recommendations in a 135-page report issued in 2017. Amongst his recommendations were the renaming of streets and squares after gay icons.