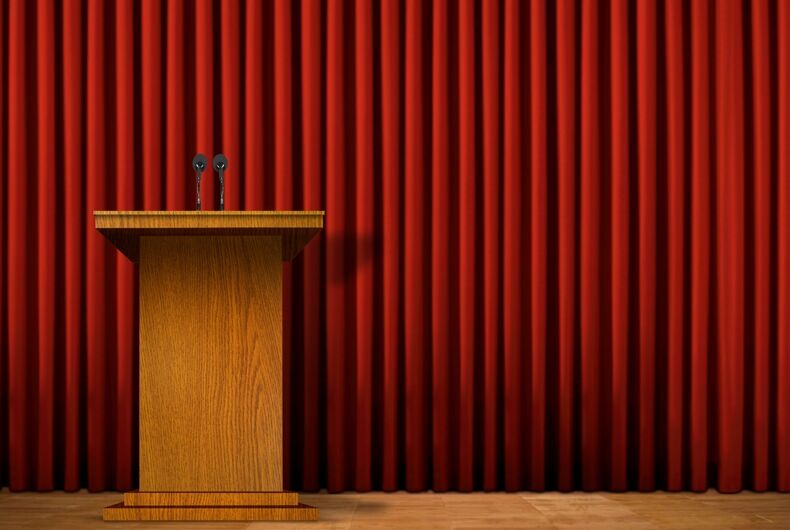 Our friends over at GLAAD have issued five questions about LGBTQ rights that moderators should ask at tonight’s democratic debate – and they’re spot on.

“Particularly on the eve of the historic 50th anniversary of the Stonewall riots, it’s important for media and those seeking the highest office in the land to discuss issues facing LGBTQ voters,” Sarah Kate Ellis, President and CEO of GLAAD, said. “No candidate or political party should take the support of LGBTQ Americans for granted. This is an opportunity to discuss LGBTQ issues as we head toward the most consequential election of our lifetime.”

With so much on the line, here are the questions the organization is hoping moderators will ask tonight.

What are your plans to achieve full equality under the law for all LGBTQ people in this country?

According to the Movement Advancement Project (MAP), LGBTQ Americans could still be:

Further, if an LGBTQ person experiences a hate crime, anti-LGBTQ attackers can still claim the so-called “gay/trans panic” defense in court in 44 states.

A poll released this week from GLAAD shows that LGBTQ acceptance overall has stalled – and even moving backward among younger generations? How will you use the power of the bully pulpit to reverse this trend and lead our country to 100% LGBTQ acceptance?

A new poll conducted by GLAAD and Harris Poll found acceptance for the LGBTQ community has waned in the last two years under the Trump Administration, with only 45% of younger non-LGBTQ Americans ages 18-34 saying they were “comfortable” with the LGBTQ community.

What will you do to stop the epidemic of violence plaguing the transgender community, specifically transgender women of color?

Violence against the transgender community, particularly transgender women of color, has skyrocketed in the last four years. So far in 2019, about ten transgender people have been murdered, repeating a national trend since 2016.

What are your plans to reverse the 115 anti-LGBTQ actions made by the Trump Administration?

Since the start of his term in office, President Trump and his administration have issued more than 115 attacks in policy and rhetoric against the LGBTQ community.

Move over cities with rainbow sidewalks, Paris has one upped you