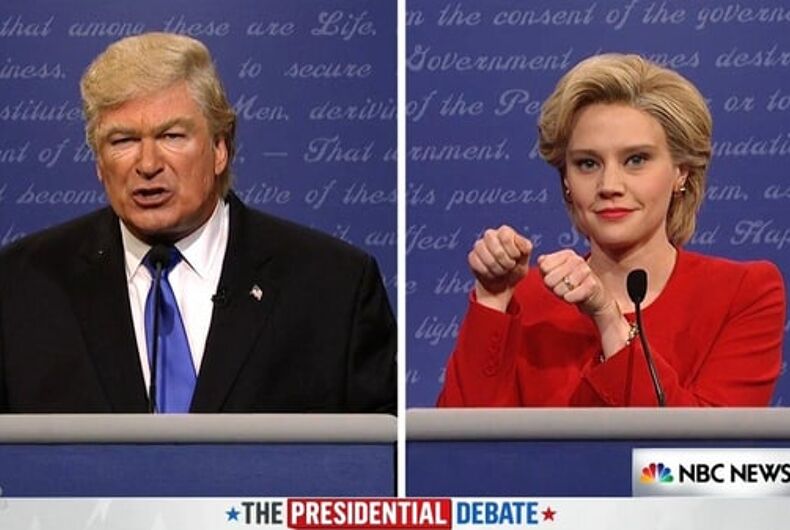 Alec Baldwin and Kate McKinnon face off as Donald Trump and Hillary Clinton in SNL's take on the first debate.

Saturday Night Live tackled the first presidential debate between Hillary Clinton and Donald Trump last night and the performances were on point.

If you watched the real first debate, the laughter may come less comfortably, because the sketch is remarkably true to life. The debate was so bizarre, little embellishment is needed to turn it into a comedy routine.

The sketch pokes fun at Clinton’s well-rehearsed witticisms, like “Trumped Up Trickle Down Economics,” and her stiff attempts at relatability while highlighting Trump’s childish antics, including his accusations that his microphone was broken.

SNL’s writers even homo-eroticize Trump’s relationship with conservative pundit Sean Hannity, with whom Trump claimed he privately shared his opposition to the Iraq war.

“We should be talking about the important issues,” Baldwin says, “like Rosie O’Donnell and how she’s a fat loser and everyone agrees with me and I just wanted to bring that up in a presidential debate. Right at the end. My own volition. I did it.”

McKinnon’s performance is more deadpan, because her candidate is. But where Baldwin’s performance highlights Trump apparent disconnect with reality, even the jabs at Clinton reinforce her qualifications for the presidency.

“Listen America, I get it. You hate me. You hate my voice, and you hate my face,” McKinnon says in her closing remarks. “Well, here’s a tip. If you never want to see my face again, elect me president and I swear to God I will lock myself in the oval office and not come out for four years. But if you don’t elect me, I will continue to run for president until the day I die. And I will never die.”

Watch the full sketch below.

Oregon’s bisexual governor comes out as a domestic violence survivor