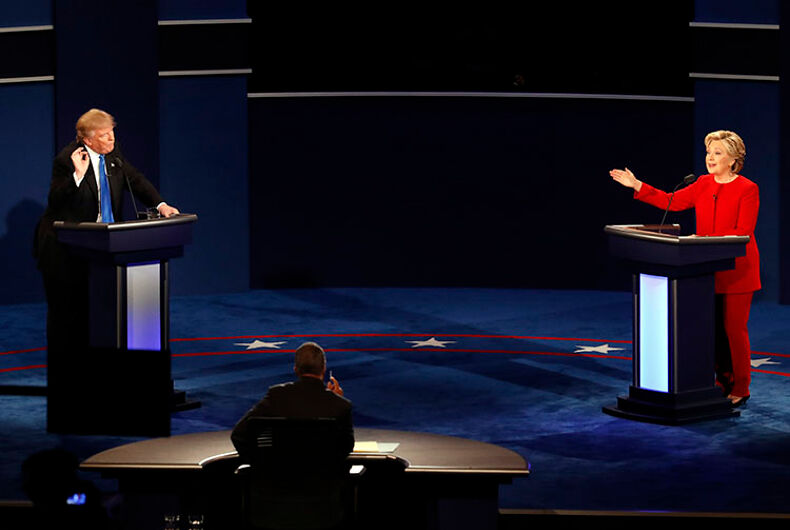 In 98 minutes, Democratic nominee Hillary Clinton showed the American people she has stamina, knowledge, understanding of complex issues and a sense of humor and grace in the face of arrogance and rudeness. That face belongs most assuredly to Donald J. Trump, Republican nominee for president.

The first woman to participate in a presidential debate repeatedly brought up issues important to women, defended the rights of African-American men, and criticized the New York tycoon for a career that hurt both of those groups. Neither candidate brought up the issue of LGTBQ rights, marriage, discrimination protections or adoption rights, nor did moderator Lester Holt of NBC News.

Clinton noted that Monday was her granddaughter Charlotte’s second birthday at the start, and promised to fight for fair pay for female workers and to increase taxes on the wealthy, as she has on the campaign trail.

Trump started with his campaign staple: attacking Mexico. “Our jobs are fleeing the country, they’re going to Mexico and many other countries,” he said. “We have to stop our jobs from being stolen from us” and is claiming that Mexico’s factory building is like “the 8th wonder of the world.”

Fact-check: click here for a look at what each candidate said that was true, or not!

Trump was eager to interrupt Hillary Clinton on the stage at Hofstra University in New York. In one exchange, Clinton said, “I have a feeling that by the end of this evening I’ll be blamed for everything that ever happened.” Trump interjected, “Why not?”

In another, Clinton said she made a mistake by using a private email system during her tenure as secretary of state. “That’s for sure,” Trump responded.

Trump offered to release his tax returns if Hillary Clinton releases the “33,000 emails” she deleted from her private server. Clinton responded by saying Trump may not be “as rich as he says he is.” Or “maybe he’s not as charitable” as he says he is. Clinton said perhaps Trump doesn’t pay any federal income tax at all.

Trump got in another dig at Clinton, saying he’s seen troubles in inner cities while she’s stayed home. Clinton responded that there was nothing wrong with spending time preparing for the debate. “You know what else I did?” she asked. “I prepared to be president.”

Clinton also punched back at Trump’s assertions that she doesn’t have the “stamina” to be president, saying Trump shouldn’t talk about stamina until he’s walked in her shoes as a globe-trotting secretary of state.

Although Trump didn’t answer Holt’s question about Clinton not having what he called the “presidential look,” Clinton said those remarks were about gender, and she reminded the crowd of Trump’s past comments calling women “pigs” and other derogatory names. Trump’s response was that he was talking about out comedian Rosie O’Donnell, and he further maligned her by saying everyone would agree with what he said about her

Fact-checking the debate: who lied more, Trump or Clinton?

Sarah Silverman wants to vote for RuPaul for president