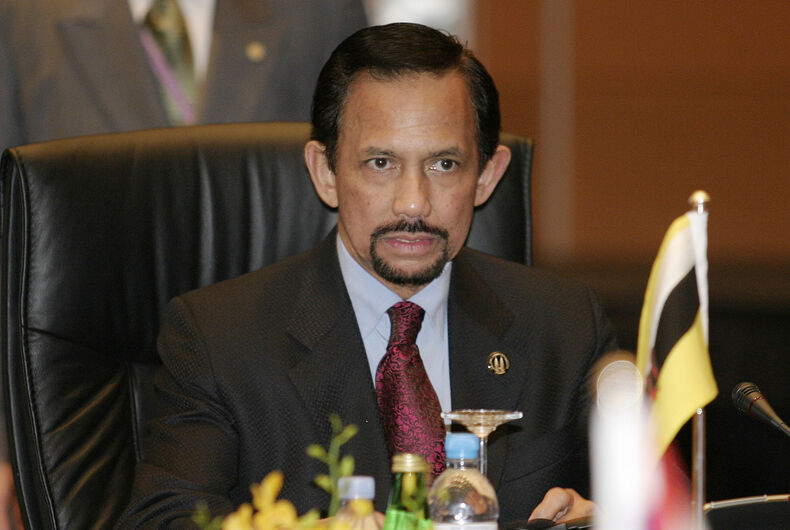 After months of public backlash and bad press, the Sultan of Brunei announced that his country will not enforce its recently passed law punishing punishing sodomy, adultery and rape with death by stoning.

In a statement, the Sultan said:

I am aware that there are many questions and misperceptions with regard to the implementation of the SPCO [Syariah Penal Code Order]. However, we believe that once these have been cleared, the merit of the law will be evident.

As evident for more than two decades, we have practiced a de facto moratorium on the execution of death penalty for cases under the common law. This will also be applied to cases under the SPCO which provides a wider scope for remission.

Both the common law and the Syariah law aim to ensure peace and harmony of the country. They are also crucial in protecting the morality and decency of the country as well as the privacy of individuals.

While this might sound like great news, questions remain about whether the law will remain on the books and whether the country will still punish adultery and rape with death by stoning. The country also has many other anti-democratic laws that forbid citizens from criticizing the Sultan and other government leaders.

One gay man in Brunei recently told The Guardian that it was unlikely that any gay people would actually be stoned to death under the homophobic law because it has a “high burden of proof, requiring a confession, or at least four credible witnesses to a criminalized act, [meaning] it won’t be easy to prosecute.”

Celebrities like George Clooney, Elton John, Jaime Lee Curtis, Rufus Wainright, Ellen DeGeneres and Dua Lipa all called for boycotts of the Sultan’s hotel properties following the passage of the antigay law. Gay blogger Perez Hilton outed the Sultan’s allegedly gay son, and gay actor and activist Omar Sharif Jr. volunteered to be executed under the law if the Sultan would execute his gay son first – and do it himself.

Brunei initially defended its laws saying that it would “deter” people from anti-Islamic acts and adding that the “sweet” and “friendly” country will offer travelers a “safe and harmonious welcome.” Islamic scholars have called the laws a gross, extremist distortion of Islamic law.

Since the law’s passage, London commuters railed against tourism ads calling Brunei an “abode of peace.” After complaints, the ads were eventually scrapped. England-based Virgin Airlines also dropped a Brunei airlines from serving its customers any longer.

A regional activist said that boycotts of the Sultan’s hotels wouldn’t help the country’s LGBTQ community as much as elevating the voices of people who live there. Pundits like Bill Maher, Andrew Sullivan and S.E. Cupp called the hotel boycott “chickensh*t tokenism” and Australia’s federal travel hotline told tourists they’d be okay in Brunei as long as they “act straight.”

The religious right wants to reclaim the rainbow for heterosexuals