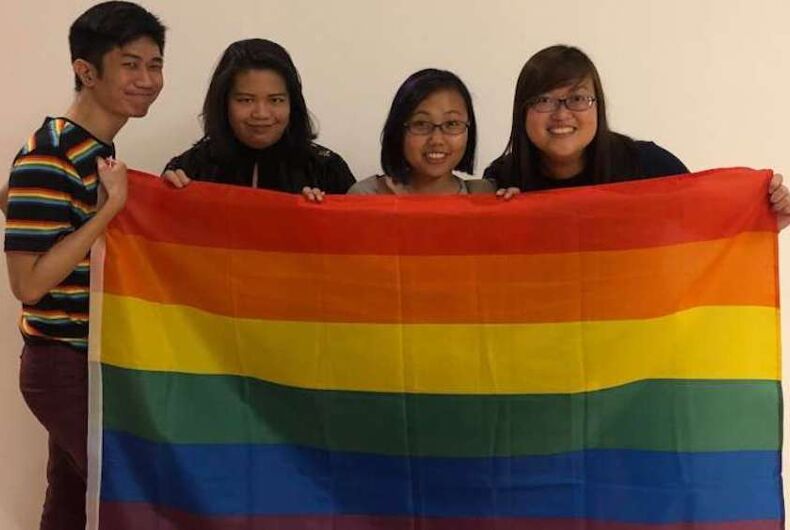 Security personnel at The Star Vista music venue in Singapore reportedly confiscated the rainbow flags of several fans who tried displaying them during a recent Troye Sivan concert.

During the concert, the out gay Australian actor and musician began talking onstage about his coming out experience. In a show of support, five friends of Benjamin Xue, a “prominent LGBTI rights activist” in Singapore, unfurled their Pride flags.

Xue told Gay Star News that a security guard told them and a group of girls behind them to stop waving their rainbow flags. Xue told the publication, “We were told not wave the flag and keep it low. People with other pride flags were also told not to wave it.”

The guard reportedly told the girls behind Xue not to hold up the flags because it would block the view of audience members behind them. But the girls said that they’d held their flags low enough so that it wouldn’t block anyone’s view. Notably, Sivan himself flew a rainbow flag later on in the concert.

Xue claims that security confiscated all rainbow flags before and during the concert — even though there weren’t any signs announcing their being forbidden. Security then held them at a table of confiscated items for their owners to reclaim after the show. Annoyingly, the reclamation table was long and took quite a bit of time to get through.

Homosexuality is illegal in Singapore. Even though the law is rarely used, punishments for the “crime” still range up to two years in prison. The country’s highest court upheld the law as constitutional in 2014.

That same year, the state-run National Library Board, which runs 26 public libraries in Singapore, decided to destroy all copies of three LGBTQ-inclusive children’s books. They eventually decided not to destroy the books and instead place them in the adult section of the library.

In 2015, 20,000 people signed a petition to ban out gay rock star Adam Lambert from performing in the country. The petition said Lambert was “well-known for his active promotion of a highly sexualized lifestyle and LGBT rights, both of which are contrary to mainstream Singaporean values.” He performed anyway.

BREAKING: Sultan of Brunei says country will not enforce its antigay death penalty