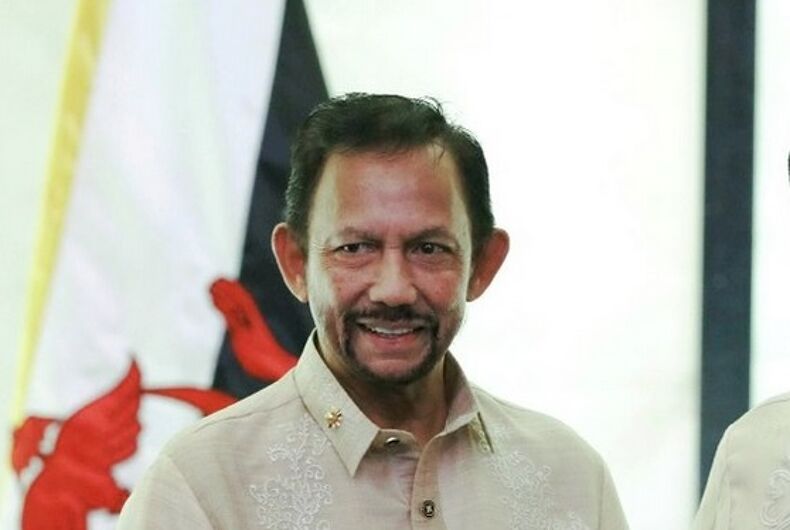 The United Nations has condemned Brunei’s law that could punish homosexuality with stoning, but the U.S. has refused to condemn the law.

A law that would increase the punishment of several crimes in Brunei that passed in 2013 is going to be implemented this week. Included in the penal reform bill is the possibility of death by stoning for people found to have violated the country’s anti-sodomy laws.

The United Nations has condemned the law, saying that human rights experts have “expressed their concerns about the cruel, inhuman and degrading punishments contained in the penal code order.”

“I appeal to the government to stop the entry into force of this draconian new penal code, which would mark a serious setback for human rights protections for the people of Brunei if implemented,” wrote Michelle Bachelet, the UN high commissioner for human rights, in a statement.

Related: George Clooney is declaring war on the Sultan of Brunei over new law that would stone gays to death

The United States, though, was more restrained.

After being asked for comment several times by The Daily Beast, the State Department issued a statement saying that the U.S. is “concerned” with the law and that the punishments “appear inconsistent” with human rights law.

“The United States is concerned with Brunei’s decision to implement Phases Two and Three of the Sharia Penal Code. Some of the punishments in the law appear inconsistent with international human rights obligations, including with respect to torture or other cruel, inhuman or degrading treatment or punishment,” the statement said.

When pressed on whether the State Department is concerned about stoning as a punishment for homosexuality or if the concern is for another aspect of the law, a spokesperson responded by supporting the “universal human rights” of “all people, including LGBTI people” in general, without referring to Brunei.

“Governments have an obligation to ensure that all people, including LGBTI people, can freely enjoy the universal human rights and fundamental freedoms to which they are entitled. We strongly oppose human rights violations and abuses against LGBTI persons, including violence, the criminalization of LGBTI status or conduct, and serious forms of discrimination,” the spokesperson said.

Secretary of State Mike Pompeo has a history of anti-LGBTQ statements.

The office of Brunei’s Sultan and Prime Minister Hassanal Bolkiah issued a statement to respond to international criticism, saying that Brunei is an “independent” country.

“The Syariah Law, apart from criminalizing and deterring acts that are against the teachings of Islam, it also aims to educate, respect and protect the legitimate rights of all individuals, society or nationality of any faiths and race.”

The Australian government website is now advising LGBTQ travelers to pretend to be straight if they’re flying to or through Brunei.

A gay couple that had previously booked a flight from Australia to the UK on Royal Brunei Airlines with a four-hour stopover in Brunei said that they contacted the website through which they booked the flights.

They were told that they could not get a refund on their tickets, which cost $2200 Australian (almost $1600 US).

The couple told news.com.au that they then reached out to Smart Traveller, which is run by the Australian Department of Foreign Affairs and Trade.

A representative said, according to one of the gay men, “If you act heterosexual you should be fine.”

Why is the government withholding billions of dollars in PrEP profits from American citizens?