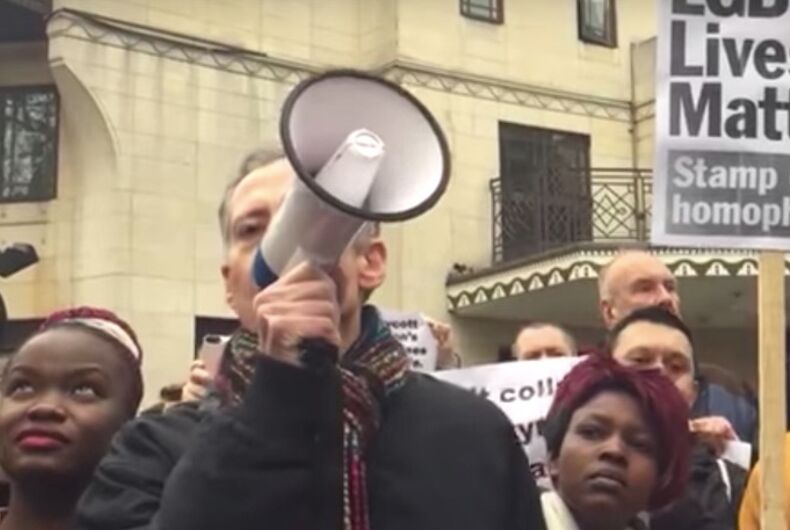 But despite the increasing public outrage over the law (and the celebrities speaking out against it), Pang Khee Teik, the editor of QueerLapis.com, a website for and by LGBT people in Malaysia (a region near Brunei), says that Brunei’s other recently passed violent, anti-democratic laws are much more harmful to civil rights, and they’re getting little notice:

Such laws will disproportionately target socially vulnerable groups, including women, children, the economically disadvantaged, and religious minorities. Yet many of the news and even some LGBT organizations do not seemed concerned about others — as if only the anti-LGBT part of new laws should be halted. In many other news articles, the stories are titled in a way to bait liberal outrage, and only mention the other horrific laws against theft and apostasy in passing….

Boycotting of a few Brunei-owned hotels or boycotting Brunei as a holiday destination to show solidarity is weird. I mean, it is nice that people want to show solidarity. But I am unsure how many people could afford those hotels anyway. Or how many were even contemplating holidays in Brunei. It is easy to boycott Brunei and their hotels. We tried that the last time and we are still here.

LGBT rights activists here are not only struggling against anti-LGBT laws. We are also fighting a barrage of laws in the region that are anti-democracy, anti-human rights and anti-freedom of expression…. Brunei outlaws criticism by legislating against insulting the Sultan: anyone who opposes his laws “shall be liable on conviction to imprisonment for a term not exceeding 5 years.”

The problem in the region therefore isn’t just homophobia and transphobia. It is a problem of undermined democracy.”

The Guardian reports that local LGBTQ people in Brunei are “skeptical that anyone will actually be stoned” because the law has a “high burden of proof, requiring a confession, or at least four credible witnesses to a criminalized act, [meaning] it won’t be easy to prosecute.”

The media outlet adds, “While capital punishment has long been law in Brunei – although by hanging rather than stoning – no one has been executed since 1957.” However, queer locals worry that the law will encourage homophobic conservatives to start hunting LGBTQ people in public.

Instead of focusing on the anti-LGBTQ part of Brunei’s recently passed laws, Teik wants people to help elevate the voices of Brunei’s and other regional queer activists.

“They may not say what we want to hear, they may want different things from what we are prepared to give. But that is okay,” Teik writes. “We need to help them to be heard.”