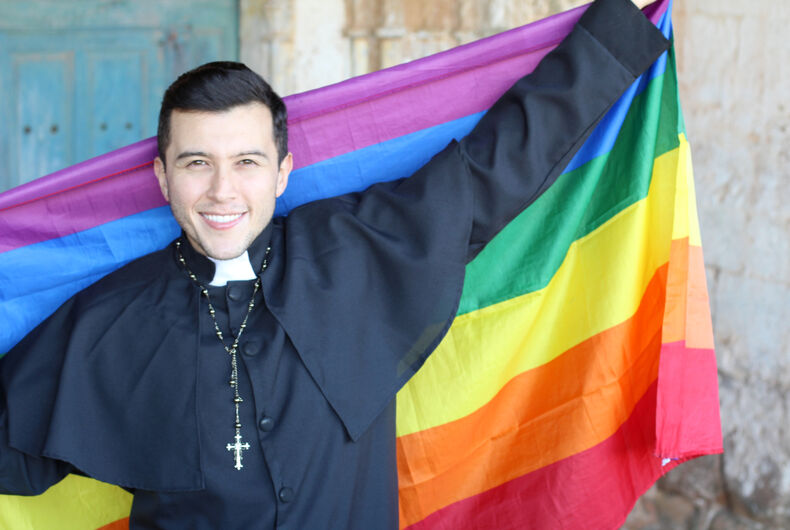 First it was the word “gay.” For decades, conservatives objected to people using the word to describe homosexuality on the grounds that it corrupted a perfectly good word and prevented it from being used to mean cheerful. No less an institution than The New York Times refused to use the word until well after its meaning was widely accepted.

Now the right has conceded that battle, even using “LGBT” to show that it’s entered the 21st century. But what the right isn’t about to do is abandon its desperate battle to de-gay the rainbow.

“Hijacking God’s Rainbow to associate it with the same sexual conduct that He severely condemns in both the Old and New Testaments is not a minor spiritual crime,” Scott Lively groused recently. Lively is best known for his connection with Uganda’s “Kill the gays” bill. He also once wrote a book blaming Nazism on gays.

Lively is hardly alone in looking at rainbows and seeing fornication. For conservative evangelicals, the rainbow is associated with Noah and the flood. But instead of a sign of hope, it’s a reminder that God’s wrath is looming.

When the Obama administration lit the White House in rainbow colors during June 2015 to celebrate the Supreme Court ruling in favor of marriage equality, evangelist Franklin Graham threw a fit. “God is the one that gave the rainbow, and it was associated with His judgment,” Graham wrote in a Facebook post. “So, when we see the gay pride rainbow splashed on business advertisements and many people’s Facebook pages, may it remind all of us of God’s judgment to come.”

Related: Someone tore down & burned a southern couple’s rainbow flag. Now everyone is putting them up.

In fact, there’s a lot of complaints like Graham’s out there in conservative evangelical circles. “God’s sign of His everlasting covenant with man has been hijacked by Satan,” according to a post on one church site. “Today, when people see the rainbow, they think of diversity and gay rights, not God’s promise.”

“The very symbol used to promote freedom among the LGBTQ population is one that communicates the fact that God’s wrath is coming upon the world of sinners,” one Christian blogger wrote.  “When Christ returns, he will certainly reclaim the rainbow for what it was originally intended for in the first place.”

Yet another site speaks of “recovering God’s stolen rainbow.” One guess as to who stole it.

Most of these complaints are heard only within an evangelical echo chamber. But unlike with the phrase “LGBT” or even the word “gay,” the religious right is unlikely ever to concede that it has lost the battle. To them, the rainbow is a biblical symbol. They’ve chosen to interpret it as a sign that God will judge sinners.

No doubt, the collective heads of the religious right will explode in June, during Pride month when rainbows are out everywhere in full display as a sign of LGBTQ support. But then again, Lively already has a rejoinder. Pride, he argues (with his unique sense of capitalization), is “the Sin Most Closely Associated with Satan in the Bible.” In short, the religious right will always find a way to condemn us. So you might as well just enjoy the rainbow.

BREAKING: Sultan of Brunei says country will not enforce its antigay death penalty