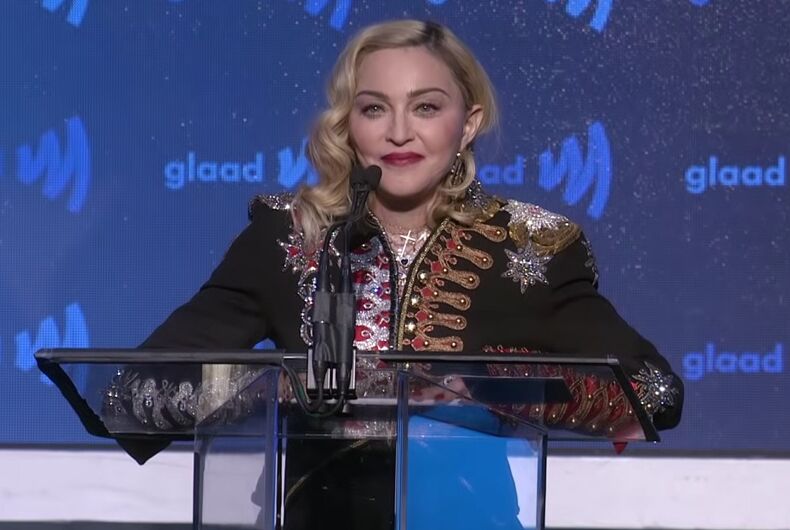 Madonna delivered a moving speech that honored the gay men who touched her life, many of whom died from complications related to HIV.

At the 30th annual GLAAD Media Awards this past Saturday, Madonna accepted the Advocate for Change Award.

She talked about her 1991 documentary Truth or Dare.

“I had no idea it was going to inspire so many gay men to, A, give blow jobs to Evian bottles, or, B, just have the courage to come out and be free and take a stand and say this is who I am, like it or not,” she said.

She talked about the first gay man she ever met, her high school dance instructor.

“The first gay man I ever met was named Christopher Flynn,” she said. “He was my ballet teacher in high school and he was the first person that believed in me, that made me feel special as a dancer, as an artist and as a human being.”

“I know this sounds trivial and superficial, but he was the first man to tell me I was beautiful.”

He took her to her first gay club in Detroit.

“For the first time I saw men kissing men, girls dressed like boys, boys wearing hot pants, insane, incredible dancing and a kind of freedom and joy and happiness that I had never seen before,” she said. “I finally felt like I was not alone, that it was OK to be different and to not be like everybody else. And that after all, I was not a freak. I felt at home, and it gave me hope.”

She left Michigan and went to New York, and in several years her friends started dying as the AIDS epidemic hit.

“The plague that moved in like a black cloud over New York City and in a blink of an eye, took out all of my friends,” she said.

“After I lost my best friend and roommate Martin Burgoyne and then Keith Haring, happy birthday Keith, I decided to take up the bull horn and really fight back.”

Part of her speech is below.

The religious right wants to reclaim the rainbow for heterosexuals