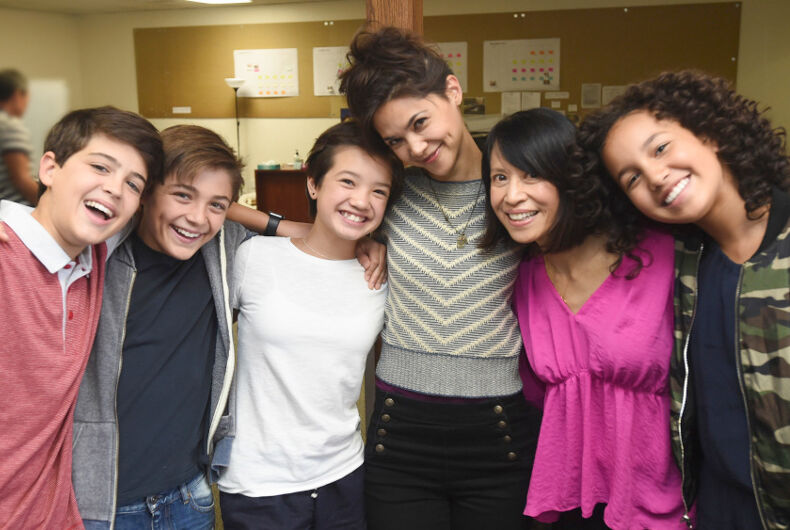 After just three seasons, the Disney Channel has decided to cancel Andi Mack, its pre-teen drama series which featured an openly gay recurring character, a first for Disney. Disney hasn’t explained why it has decided to cancel the show despite it being an award-winning program and the channel’s most-watched series overall.

Three years ago, we challenged Terri Minsky to create a new series that expanded and broadened the Disney Channel brand. And so was born Andi Mack. We are forever grateful to Terri, her talented team and the outstanding cast, led by Peyton Elizabeth Lee, for delivering a meaningful and satisfying conclusion to three wonderful seasons of this brilliant series.”

The show broke new ground in October 2017 by having Cyrus Goodman, a friend of the show’s titular heroine, reveal his same-sex crush. While the show never explored his sexuality with much depth, Goodman later uttered the words, “I’m gay” in February 2019. The show was banned in Kenya, Africa over of its gay content. The series’ finale will air July 26.

Andi Mack‘s coming out episodes were all the more groundbreaking considering that the show was the channel’s most popular program among six- to 14-year-old viewers. Interestingly, Andi Mack was the channel’s second live-action series ever to present a gay character. Disney featured a same-sex female couple in a 2014 finale episode of its live-action sitcom Good Luck Charlie.

Related: The strange case of the missing gay Disney Mouseketeer and the body found at his home

The Disney Channel has also featured two same-sex couples in two of its cartoons. An August 2017, episode of the Irish animated children’s TV series Doc McStuffins featured a same-sex female couple voiced by lesbian actresses Portia de Rossi and Wanda Sykes, and a February 2017 episode of their animated adventure series Star vs. The Forces of Evil showed a non-recurring, male same-sex couple kissing at a boyband concert.

In August 2018, Disney announced that it would present its first-ever openly gay character in its upcoming film Jungle Cruise starring straight actor Jack Whitehall as a gay character who is “hugely effete, very camp and very funny.” The character will reportedly never utter the words “I’m gay” despite making it “clear he has no interest in women.”

Jungle Cruise will premiere sometime in 2020.