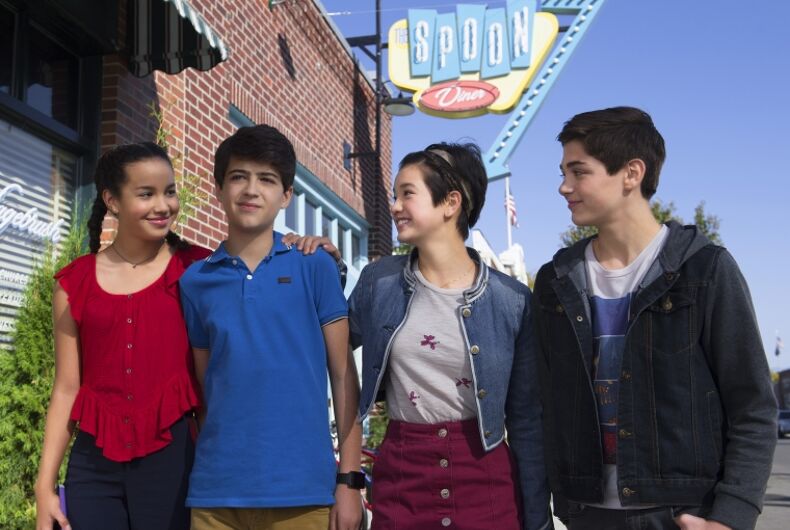 The show centers around a young teenage girl, the titular “Andi,” played by Peyton Elizabeth Lee, who learns that who she thought was her older sister is actually her mother. She is working to navigate the world and her place in it, with the support of best friends Cyrus (Joshua Rush) and Buffy (Sofia Wylie).

So it seems the perfect vehicle to place a story about a character making their own journey of self-discovery as a member of the LGBTQ community.

GLADD describes the scene in a statement praising the show’s inclusion of the topic:

In the episode, Cyrus confides in Buffy. The scene, and what Buffy says to Cyrus, makes for positive role models both for kids and adult viewers. In subsequent episodes, Cyrus begins to understand himself, and can count on his supportive friends Buffy and Andi who, as teenagers, are also on a journey to self-discovery. He also grapples with how to tell his new girlfriend, Iris, about his new understanding of himself.

Both GLAAD and the network say the show will have a positive impact.

“With more and more young people coming out as LGBTQ, Andi Mack is reflecting the lives and lived experiences of so many LGBTQ youth around the country,” said Sarah Kate Ellis, President and CEO of GLAAD. “Television reflects the real life world and today that includes LGBTQ youth who deserve to see their lives depicted on their favorite shows. Disney has been a leader in LGBTQ inclusion and there are so many young people who will be excited to see Cyrus’ story unfold.”

“’Andi Mack’ is a story about ‘tweens’ figuring out who they are,” a Disney Channel Spokesperson said. “Terri Minsky, the cast and everyone involved in the show takes great care in ensuring that it’s appropriate for all audiences and sends a powerful message about inclusion and respect for humanity.”