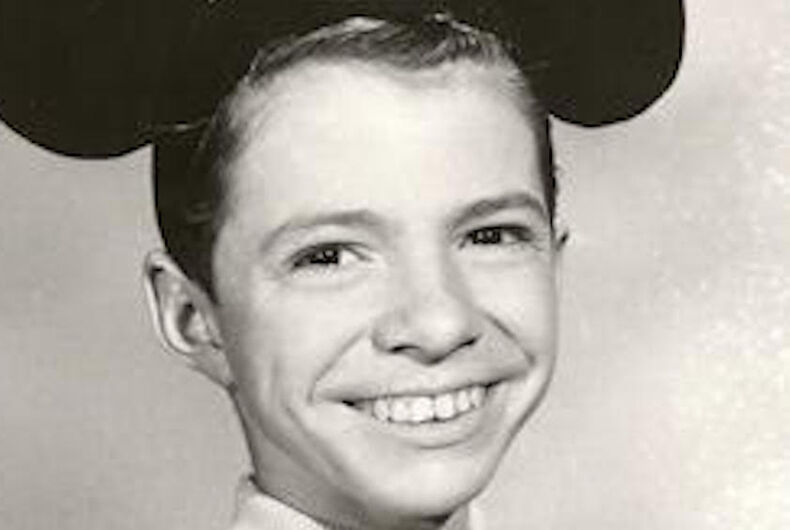 In 1955, Disney began airing The Mickey Mouse Club, a kid’s TV show with young “Mousketeers” performing in musical, dance and informational segments. One of its original Mouseketeers, 13-year-old Dennis Day, would later come out as gay, marry his boyfriend Ernie Caswell and move to Oregon. But in July 2018, Caswell reported Day as missing. Police just found remains on Day’s home property, raising more questions than answers.

Day appeared in the first two seasons of The Mickey Mouse Club and went on to appear on its 1968 and 1980 reunion shows. Around 1960, he came out as bisexual to his accepting family and moved out of their Downey, California home to San Francisco so he could “live in a city where the gay community was more celebrated,” according to his sister.

By 1973, Day self-identified as “militantly gay.” Around that time, he met Caswell and began bringing him to his family’s Christmas celebrations. In the 1980s, Day and Caswell moved to Oregon where, after 37 years together, they un-lawfully married in 2009.

Here’s a montage of Day’s appearances on The Mickey Mouse Club:

In July 2018, Caswell, who had developed colon cancer and dementia, reported Day as missing. Caswell’s dementia made him forget the phone number of Day’s family, so the family hadn’t heard from him in months when a January 2019 TV report informed them of his disappearance.

Police informed the family that “a man who was living at Dennis and Ernie’s house at the time Dennis disappeared, said Dennis had left on foot, saying he was going to visit some friends,” leaving behind his beloved dog and cat.

Police later discovered Day’s car on the Oregon coast with two strangers inside who said he’d let them borrow it. Police impounded the vehicle and searched Day’s home property, a nearby graveyard and creek using drones and cadaver dogs, but they found neither a body nor evidence of foul play.

Related: His Christian parents told him his gay brother was “missing”

Day’s family considered the investigation “poorly-handled” and set up a “Help Us Find Dennis Day!” Facebook group. None of Day’s bank or credit card accounts had been used since his disappearance, and because he had a paid cell phone and didn’t use social media, no one had been able to track his final movements.

Police recently found human remains on Day’s Phoenix, Oregon home property, but have yet to identify them. It remains unclear what happened to Day.

According to one source, “Dennis worked part-time at Harry & David, a store and catalog business that sells gourmet fruit and food items. Dennis and Ernie also developed their own line of wine jams and jellies with items such as Garlic and Onion Burgundy, Jalapeno Pepper Jelly, and Banana Jam.” Day would be 76 years old today.

How do we stop shootings when gun culture is encoded into the DNA of American identity?