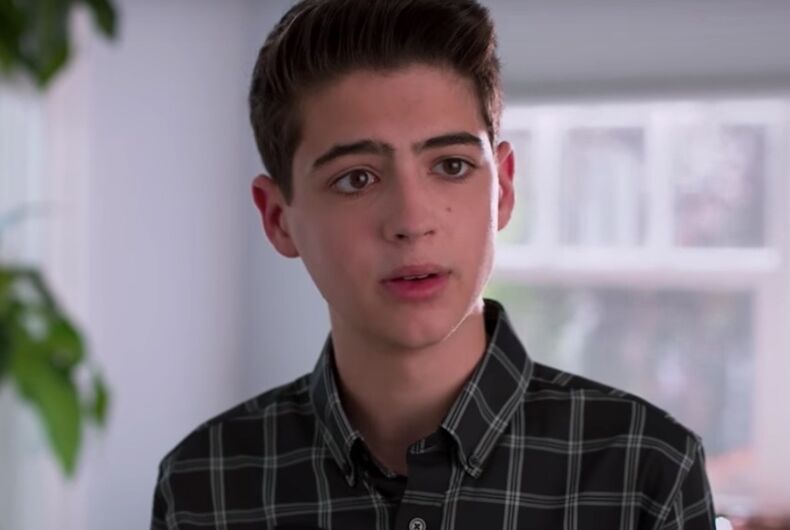 In October 2017, the Disney Channel broke new ground by broadcasting its first-ever coming out story involving a recurring character. It occurred in its live-action pre-teen drama Andi Mack. But the groundbreaking moment didn’t actually have the character announce, “I’m gay” … until now.

In an Andi Mack episode which aired this Friday, entitled “One in a Minyan,” the character Cyrus has a grandmother who dies. When his friend (and secret male crush) Jonah attends the Shiva, the seven-day Jewish period of mourning following funerals, Cyrus decides to admit to Jonah that he’s gay.

Cyrus chooses to do this because beforehand, he helps Jonah recover from a panic attack, leaving both boys feeling close and emotionally vulnerable.

After Cyrus admits his sexuality, Jonah responds with a quick, supportive, “Cool.”

You can see a behind-the-scenes clip of Cyrus’ coming out below:

The episode was written by openly gay Jewish writer Jonathan Hurwitz, a man who also suffers from panic attacks.

Related: Disney is going to keep a gay character from using the word “gay”

Hurwitz told GLAAD, “As someone who’s Jewish, has dealt with long-term anxiety, and has come out to his friends and family, I had a very personal stake in this one…. [We] sought to ensure that we treated the portrayal of the Shiva, Jonah’s panic attack, and Cyrus’ coming out with the deepest care and respect.”

Hurwitz’s experience coming out to a friend when he was 20 years old was very similar to Cyrus’ experience in Andi Mack. At first, Hurwitz felt slightly hurt by his friend’s nonchalant acceptance of his newly announced gayness.

“But what I ultimately realized,” Hurwitz says, “was that my friends and family loved me unconditionally before I’d even learned to truly love myself.”

This episode is merely the latest in Disney’s gradual steps towards introducing gay, age-appropriate content to its young viewers.

The company also included a much-overhyped gay moment in its 2017 live-action Beauty and the Beast film and a same-sex kiss in the background of the Disney Channel’s animated action series Star vs. the Forces of Evil.

The upcoming Disney film Jungle Cruise will feature the first openly gay character in a full-length Disney live-action feature film, but it’s unclear if the character will ever actually utter the words, “I’m gay.”