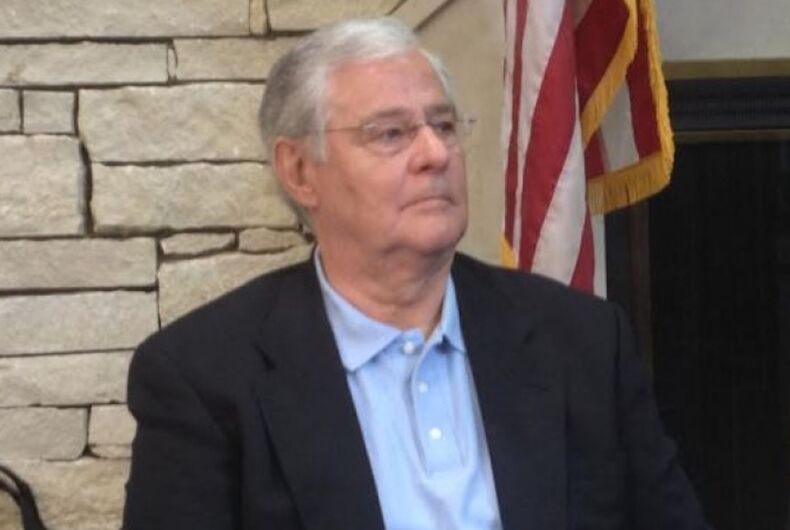 Last week, Kansas Republicans submitted one of the “most vile, hateful and disrespectful” anti-LGBTQ rights bills ever introduced in a state legislature.

But now, after being publicly admonished by his queer daughter, Ron Highland, one of the Republicans representatives who co-sponsored the bill, has publicly withdrawn his support and apologized.

Highland’s daughter, Christel Highland, publicly posted a letter on Facebook, identifying as a member of Kansas City’s LGBTQ community,  and stating, “I am personally offended by the egregious nature of Kansas Representatives’ proposed legislation, most notably, my father’s.”

Her letter went on to say:

“Your most sacred job as an elected official is to serve and protect people. Your God did not elect you, living, breathing humans beings did. Further isolating the marginalized among the population you serve is far from your duty.

“Hate has no place in public policy. I respectfully request an apology on behalf on my family and beloved friends that this cruel attempt at legislation impacts—viable or not—and I beg that you show yourself to be the honorable man I’ve always known you to be. Ultimately, what is right can never be something that hurts another. You taught me that.”

“I love you, I always will, in spite of your flaws… I cannot, however, condone your cruel actions. Shame on you.”

Here is her letter in full:

After reading her public letter, her father apologized and removed his name as one of the bill’s co-sponsors.

“The bill that I should not have signed on to cosponsor contained some hateful language which I do not condone, and it is against our Lord’s command to love our neighbors,” he said. “I have asked for my name to be removed from the bill. The process for doing so is in motion.”

His daughter responded with a public statement stating, “It took strength to do what my Father did, and I’m proud of him for setting an excellent example to his colleagues and constituents…. This situation is an example of what is possible if we work together toward good with love in our hearts.”

The bill was introduced thanks to the influence of Chris Sevier, an anti-LGBTQ activist with a long history of wasting taxpayer money with frivolous lawsuits, ultra-conservative legislation and stalking. He has most famously tried to marry his laptop and was arrested for staling a 17-year-old girl. His ex-wife has a restraining order against him.

Despite the odious bill, Kansas recently restored civil protections for its LGBTQ citizens and is considering landmark legislation that would ban anti-LGBTQ discrimination.

A gay activist’s #DisabledPeopleAreHot campaign is heating up social media