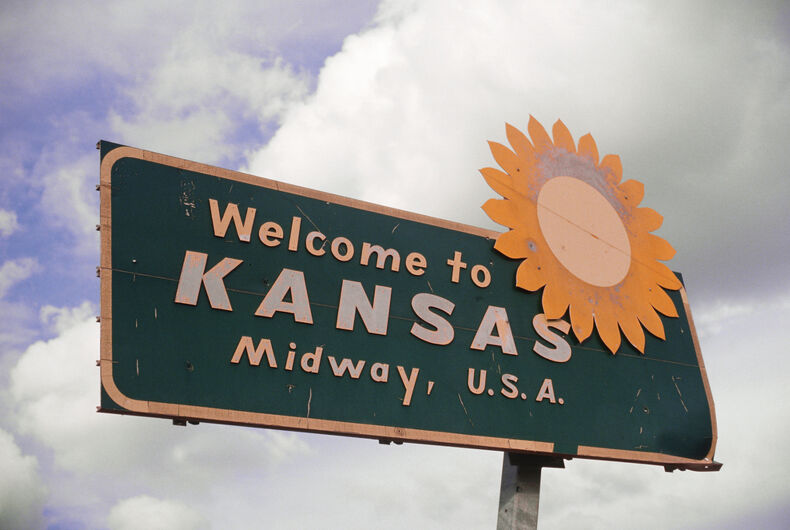 Just over five weeks into the new year, 2019 is already shaping up to be a historic one for LGBTQ rights in Kansas.

At least 55 lawmakers have signed onto a pair of bills which would outlaw discrimination on the basis of sexual orientation, gender identity, or gender expression in housing and employment. A House bill authored by Reps. Susan Ruiz (D-Lenexa) and Brandon Woodard (D-Shawnee) already has 36 co-sponsors.

While neither bill has received a hearing in the Kansas Legislature, Bollier’s legislation is strongly poised for success in the Senate. The proposal only needs three additional supporters to pass the 21-vote threshold in the upper house of the lawmaking body.

The hill is a bit steeper to climb in the House, however. Ruiz and Woodard need 25 more “Yes” votes to garner the 61 necessary for passage in the lower chambers.

Related: Kansas is getting LGBTQ protections because elections have consequences

The bill’s sponsors believe they can get there, despite the setbacks of previous years.

In December, Ruiz and Woodard met with Tom Witt of the advocacy group Equality Kansas to discuss LGBTQ rights legislation in the upcoming session. Witt has pushed for a nondiscrimination bill in the legislature for a decade to little avail. The issue hasn’t been heard in the Kansas House since 2015.

“Tom’s been trying to get this passed for years,” Ruiz told LGBTQ Nation over the phone. “It’s never really made it to the floor.”

But supporters say 2019 could be different. In November, Kansas elected Sharice Davids, its first openly LGBTQ representative to the U.S. House. Although it didn’t garner national headlines, Ruiz and Woodard joined Davids in making history: They became the first out queer members of the Kansas Legislature.

Woodard said their midterm wins are another reminder that Kansas—like the rest of the country—has “changed a lot” since the state House last took up the issue.

“When the legislative session met in 2015, I couldn’t get married,” he said over the phone. “Today I can. We’ve made some progress on LGBTQ equality, and we’ve also seen some backward steps here in Kansas. But I think everyone is ready for us to move forward.”

The Sunflower State has already begun to take steps in the right direction.

On her first day in office, newly elected Democratic Gov. Laura Kelly reinstated protections for LGBTQ state employees nixed by her predecessor, Sam Brownback. Kelly has stated that she would sign a statewide nondiscrimination bill if it crossed her desk, calling it “long overdue.”

If Kelly were to make Kansas the 22nd state to ban anti-LGBTQ discrimination, polls show Kansans would be widely supportive.

According to a 2017 survey conducted by the Public Religion Research Institute (PRRI), more than two-thirds of Kansas residents (67 percent) are in favor of fully inclusive nondiscrimination protections. A similar poll from all the way back in 2011 showed that a nearly identical number—68 percent—supported a nationwide ban on anti-LGBTQ discrimination.

“Many people don’t realize LGBTQ is not a protected class in our state,” Woodard said. “So when they learn they can be fired for being gay or get married on Sunday and evicted the next day, they usually think that’s not right.”

But despite widespread public support, conservative groups have continued to oppose the bill based on fears it could infringe on “religious liberty.” Brittany Jones, advocacy director for the Family Policy Alliance of Kansas, predicted a nondiscrimination law would be “used as a sword” against people of faith.

On the conservative group’s website, Family Policy Alliance further warns that laws forbidding anti-LGBTQ bias are “unnecessary” and “trample on the rights of religious people.”

According to Ruiz, those complaints are unfounded. The Kansas Act Against Discrimination already forbids prejudicial treatment on the basis of religion, as well as ancestry, color, disability, national origin, or race. Additionally, the 1953 law offers exemptions for religious institutions.

The bill sponsored by Ruiz and Woodard would merely update the existing law by adding LGBTQ people to it.

“We’ve been directing [conservatives] to go back and read the actual act, and they will see for themselves,” she claimed. “It’s not something that’s going to be used against them in any kind of way.”

Since sponsors of the nondiscrimination bill filed the legislation this week, Woodard said they have been meeting with their Republican colleagues to address these concerns. Calling it an “educational opportunity,” he claimed that politicians “across the board see this as a common-sense policy.”

A number of conservative lawmakers have already come out in favor of the nondiscrimination effort. The House bill garnered two Republican co-sponsors, while six conservatives co-sponsored the Senate version.

Several House representatives told Ruiz that they couldn’t cosponsor the bill but would vote “Yes” if it comes to the floor.

“We’re feeling really positive about this,” she claimed.

Ultimately, it will be up to leadership in the House and Senate whether the nondiscrimination bills receive a hearing this year.

While the “Blue Wave” may have helped Democrats like Kelly and Davids win election in 2018, both houses of the Kansas Legislature remain solidly red with conservatives boasting supermajorities in both bodies. Republicans have a 17-seat advantage in the Senate and dwarf Democrats in the House by a massive 43-seat margin.

Even if every single House Democrat votes “Yes” on the bill, supporters still need to flip 20 conservatives.

And despite recent momentum on LGBTQ rights, this is still Kansas. While two cities in Johnson Country, Mission and Prairie Village, passed their own citywide nondiscrimination ordinances in December, the state legislature also approved a bill allowing adoption and foster care agencies to turn away same-sex couples just months earlier.

Passing a nondiscrimination bill in one of America’s reddest states will undoubtedly be a challenge. Woodard said, however, that there’s been nothing but an “outpouring of support” thus far.

When Woodard sent an email to some of his Republican colleagues earlier this week thanking them for signing onto the legislation, he took the responses to heart. One claimed he was “happy to help.”

“I believe that all Kansans and all people should be treated equally,” the response read.

“I’ll never knowingly vote to discriminate against anyone or any group and will always vote to support good legislation to advance rights for Kansas,” another conservative supporter added.

Time will tell if members of their party agree.

When they found out trans students were in need, these Hoosier teens stepped up to help out