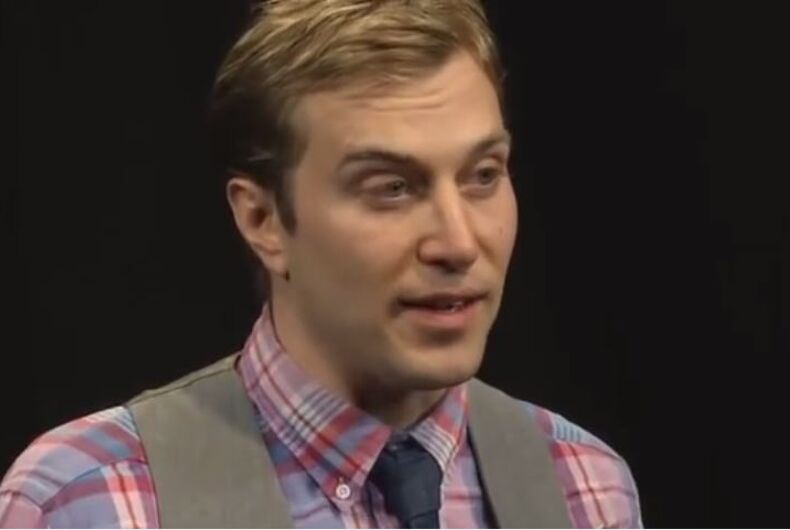 This has not been Chris Sevier’s week.

The anti-gay activist who once sued to marry his laptop has been classified as a “security concern” at the Missouri Capitol Building. As the Kansas City Star reported on Thursday, Missouri Senate Administrator Patrick Baker emailed a photograph of Sevier to all members of the legislature’s upper chambers.

“He said two Senate offices and one in the House of Representatives reported uncomfortable meetings with the former Tennessee lawyer,” the newspaper claimed.

Dietrich told the Star that Sevier “would not take no for answer” after she informed him she “was not interested… in signing onto those bills.”

RELATED: This guy’s lawsuit said that the rainbow flag is a religious symbol. He just lost

In comments to NBC News, openly gay Kansas State Rep. Brandon Woodard (D-Lenexa) added that several of his Republican colleagues had “kicked [Sevier] out of their offices” after initially agreeing to meet with him.

“I also heard that because he’s not a registered lobbyist, he was asked to leave the building,” Woodard claimed last Friday.

However, Sevier’s alarming behavior is not limited to harassing elected lawmakers. He was also slapped with a restraining order after allegedly stalking country music star John Rich, who Sevier compared to “Hitler.” He was also forced to wear a GPS tracker after reportedly threatening a 17-year-old employee at a Ben & Jerry’s ice cream shop.

Sevier has also been accused of attempting to abduct his infant son during supervised visitation.

Despite claiming to be an attorney for Warriors for Christ and the Special Forces of Liberty, Sevier does not appear to be licensed to practice law in any U.S. state. After his license was suspended in Tennessee due to concerns about mental fitness, he unsuccessfully fought to have it reinstated on at least two occasions.

Sevier has found a surprising amount of success at seeing his legislation introduced given his unsavory history.

Last year, Sevier found sponsors for his “parody marriage” bills in both South Carolina and Wyoming. Calling the LGBTQ community part of “the religion of Secular Humanism,” they claimed same-sex unions are “non-secular” and violate the Establishment Clause of the U.S. Constitution.

The First Amendment states that the U.S. government cannot favor one religion over another or establish an official religion. “Secular humanism” is not a religion.

Kansas lawmakers will debate two similar proposals, known as HB 2320 and HB 2321, this year, but neither is likely to become law. Woodard said many of the lawmakers who sponsored Sevier’s legislation had already apologized, saying they hadn’t read it.

Republican leadership in the Kansas State Legislature have reportedly refused to allow a vote on the bills, especially in light of recent safety concerns surrounding Sevier.

But if Sevier is having a bad week, it hasn’t been a great month or year for him either.

His fight to marry his 2011 MacBook—a response to the legalization of same-sex marriage—has been tossed out of courts in Texas and Utah. He has filed similar suits in a half dozen other states to little avail.

Other failed litigation includes lawsuits against state lawmakers who fly LGBTQ Pride flags outside their offices.