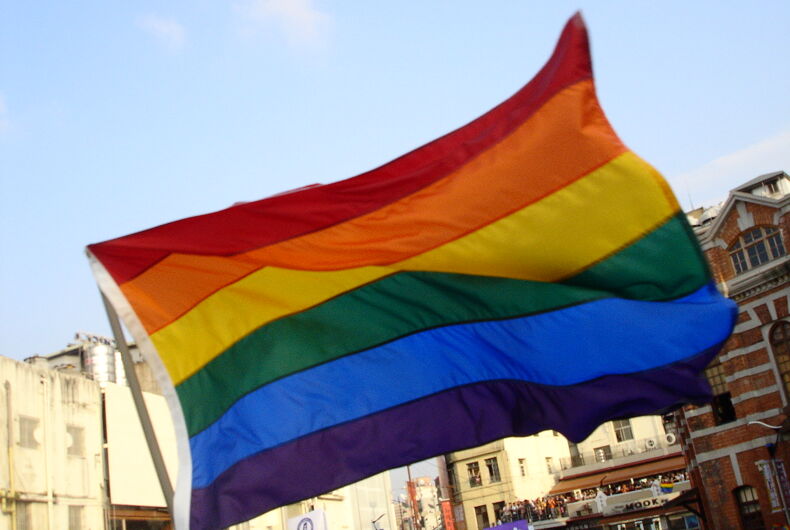 A federal judge has thrown out a lawsuit filed against members of Congress who displayed rainbow flag outside their offices in Washington, DC.

Anti-gay gadfly Chris Sevier sued congressional representatives with the bizarre claim that the rainbow flag is a religious symbol, and thus the members of Congress are violating the constitutional prohibition against government establishment of religion.

A religion? Really? Does this mean we can get Judy Garland’s birthday off as a religious holiday? Maybe Madonna’s too?

Judge Randolph D. Moss of the U.S. District Court for the District of Columbia rejected Sevier’s argument on the basis of common sense.

“The gay rights movement bears no trappings of ‘religion’ as that concept is widely understood,” Moss wrote in his opinion. “Common sense… forecloses Sevier’s claim.”

So does this mean that Sevier will finally shut up and go away?

Chris Sevier, who sometimes also goes by Mark Sevier, is the Nashville resident who tried to overturn same-sex marriage by seeking to marry his laptop. Sevier sued, unsuccessfully, to have the “marriage” recognized in several states.

He also sued Apple, in a suit demanding that the company sell all of its products in safe mode to limit access to pornography. In fact, he’s sued everyone from fellow anti-gay activist Kim Davis, to former president Barack Obama — and has yet to win a single suit.

He also co-authored a bill introduced in the South Carolina state legislature, which defined marriage as a union between “a man and a woman,” and called other forms of marriage “parody marriages.” Presumably, that included unions between man and laptop.

With any luck, we’ve heard the last of Chris Sevier for a while. It’s doubtful, but we can still hope.