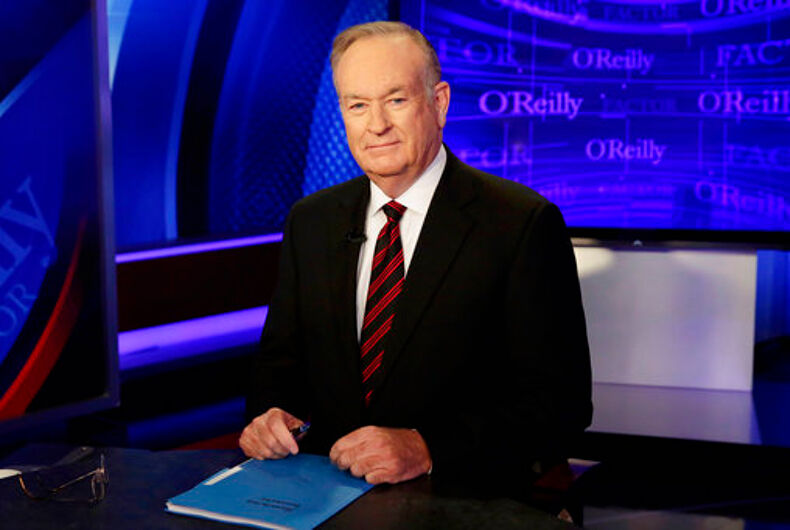 FILE - In this Oct. 1, 2015 file photo, host Bill O'Reilly of "The O'Reilly Factor" on the Fox News Channel, poses for photos in the set in New York. While advertisers may be fleeing Bill O'Reilly's "no spin zone" on Fox News Channel, viewers are remaining loyal. "The O'Reilly Factor" averaged 3.71 million viewers over five nights last week, the Nielsen company said. That's up 12 percent from the 3.31 million viewers he averaged the week before and up 28 percent compared to the same week in 2016.Photo: (AP Photo/Richard Drew, File)

Bill O’Reilly went on a bizarre rant about racism on his podcast No Spin News.

After implying that the only racism that counts is black people speaking out against racism, he said, “Now whiteness has become the issue.”

He said that immigration itself is an attack on “whiteness” – conservatives usually say that their opposition to immigration has nothing to do with the race of immigrants – as well as Me Too.

“So then the Me Too movement, very closely aligned with the progressive left, very, very closely aligned,” said O’Reilly, who lost his Fox News show in 2017 when the New York Times reported on multiple sexual harassment accusations against him. “Get those white guys, get ‘em, get ‘em.”

O’Reilly then discussed an academic paper by Riyad Shahjahan and Annabelle Estera – making sure to mispronounce their names – in which they examined the stock images used on websites of colleges and universities.

Shahjahan and Estera wrote that the images portray “white and male bodies as universal, neutral, and desirable,” and promoted heteronormativity and homonormativity (the paper is behind a paywall).

If you think an esoteric academic paper that few people are even allowed to read wouldn’t be important enough for O’Reilly to rant about, you’d be wrong.

“So the white people have to be swept out of power, got to get them out, let the LGBTs and the minorities, and they have to run the show, that’s what it is all about, what this is all about and they’re making strides like crazy,” he said.

Who knew that the infamous “homosexual agenda” was about disempowering white people.

This guy’s lawsuit said that the rainbow flag is a religious symbol. He just lost.