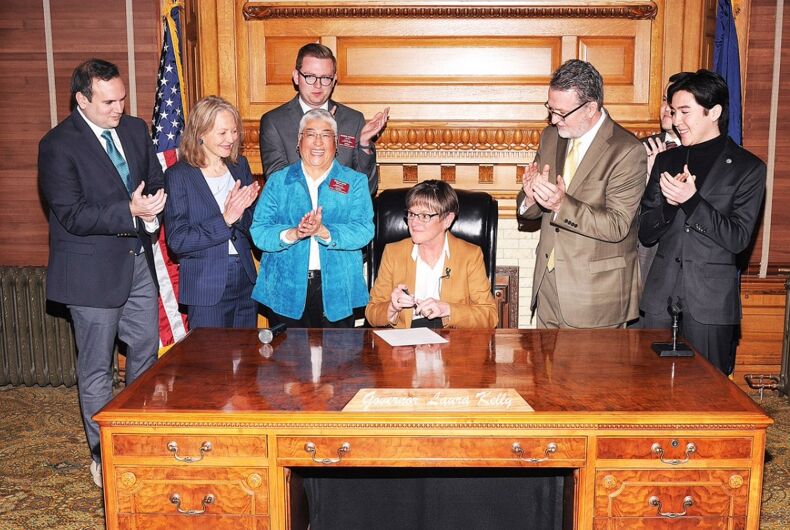 As my first official act as Governor, I am reinstating protections to state employees who are gay, lesbian, bisexual or transgender. EO 2019-02 restores rights that were taken away in recent years.

Discrimination of any kind has no place in Kansas. It will not be tolerated. pic.twitter.com/MAi7mFzuYN

“Discrimination of any kind has no place in Kansas,” Kelly said on her official Twitter account. “It will not be tolerated.”

Kelly was sworn in Monday, ending an eight-year reign by Republicans San Brownback and Jeff Colyer. She will be facing a GOP-dominated state House and Senate.

Brownback, a strict conservative, issued an executive order in 2015, rescinding protections for LGBTQ state workers that were put in place by former Governor Kathleen Sibelius in 2007.

Those protections that are now back, thanks to Kelly.

The new Executive Order also expands the policy, including government contractors under the protections.

The new order will only affect those departments under the Governor’s direct control, affecting some 19,000 state workers. With the extension to government contractors, however, this could affect many more.

In her inaugural address on Monday, Kelly made her feelings about LGBTQ individuals and others in the state clear, saying, “We must seek to lift up all Kansans regardless of whether they look like us, think like us, worship like us, love like us or vote like us.”

Meanwhile, Representatives Susan Ruiz (D-Shawnee) and Brandon Woodard (D-Lenexa) are planning to introduce a bill to add sexual orientation and gender identity to the state’s non-discrimination laws. Both Ruiz and Woodard are out members of the LGBTQ community.

Kelley has stated that she would sign such a bill.

An LGBTQ community champion has announced she’ll run for President