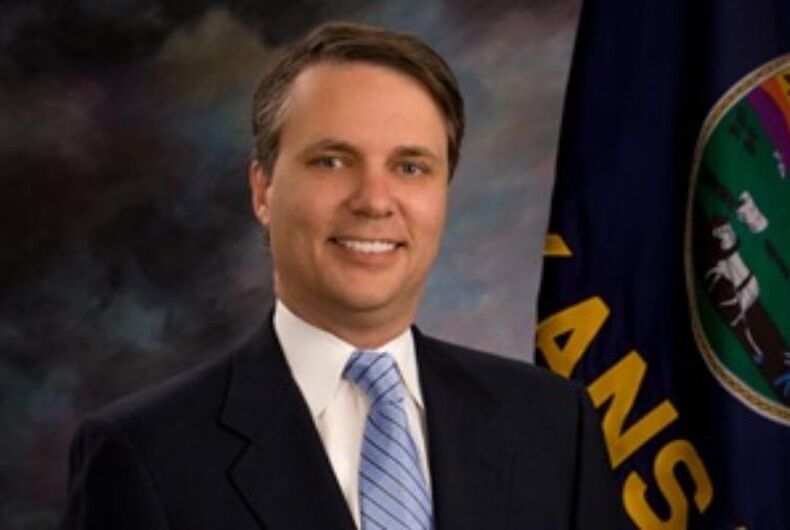 The bill, which was passed by the legislature earlier this month, would make it legal “for foster care or adoption when the proposed placement of such child would violate such agency’s sincerely held religious beliefs.”

Colyer signed the bill yesterday at a Christian nonprofit organization.

“What I want Kansans to know is this is about fairness and that we are protecting everyone,” Colyer said about a bill that would legalize discrimination.

“We’re looking after those kids that need a forever home,” he said, referring to a bill that would deny kids a family for reasons other than their best interests.

Colyer was the Lieutenant Governor of Kansas when former Governor Sam Brownback was picked by Donald Trump to lead the Office of International Religious Freedom at the State Department.

At his confirmation hearings, Brownback implied that there are circumstances in which it is acceptable to execute people for being LGBTQ. Colyer has been accused of sharing Brownback’s ideology.

“This is a moment of truth for Jeff Colyer today,” said Jim Barnett, a Republican candidate for governor. “He signed discrimination into Kansas law and showed Kansans that the people that controlled Brownback control him.”

Lori Ross of FosterAdopt Connect, a network of adoption agencies, said that the bill would discourage LGBTQ parents from fostering and adopting and would result in LGBTQ kids being placed in homes that aren’t accepting.

“It is completely unfair that those same people who are going to be discouraged from fostering and adopting are going to be paying taxes into the state that are going to be used to pay agencies to do work that would discriminate against them,” she said. “There’s nobody, myself included, that says a religious-based organization doesn’t have a right to practice whatever their deeply held religious beliefs are. When it becomes a problem is when public dollars are being used to fund a service.”

Conservative Christians defended the bill by saying that their religious beliefs are more important than placing children in the best homes available.

“Christian agencies should be able to exercise their Christian beliefs in doing something that is as personal and spiritual as building a family,” said Julian Thomas of St. Nick Adoptions.

Here are the 10 most popular gender-nuetral baby names