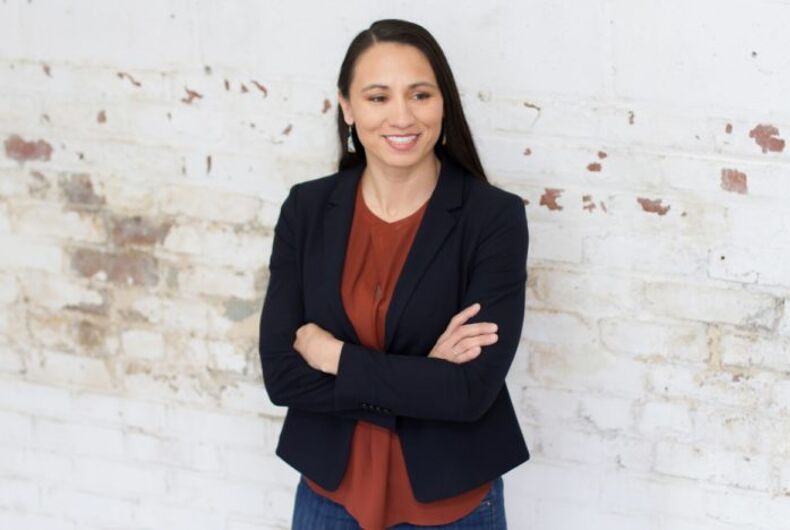 “Tonight Kansas voters gave the boot to a Trump ally and replaced him with a groundbreaking LGBTQ leader who spoke her truth throughout the campaign,” said former Houston mayor and current President & CEO of LGBTQ Victory Fund, Annise Parker, said.

Davids ran on a very solidly democratic platform focused on pushing back on Trump, gun control, and expanding health care. She served as a White House fellow under Obama.

Her opponent, Kevin Yoder, is a long time congressman and Trump supporter. He won his last four outings by double-digit margins.

Related: These female LGBTQ candidates are the real gamechangers in the midterm election

Support for Yoder has been flagging in recent months, with him trailing since the end of the primary. He was able to tighten the gap by election night, but not by enough to eke out a win.

The 3rd district was won by Clinton in 2016, but has not elected a Democratic congressperson in a decade.

Davis is a member of the Ho-Chunk Nation in Wisconsin, and one of two Native Americans running in this election, sharing the distinction with New Mexico Democrat Deb Haaland, who also won her race. There has never been a Native American woman in Congress.

She is also the first LGBTQ person to represent Kansas at the federal level, and one of the few openly LGBTQ people to ever serve in congress.

Davids beat five democratic challengers in the primary, including a favorite of progressives, Brent Welder, who was endorsed by Bernie Sanders.

Parker noted that Davids’ win opens the door for future candidates to follow in Davids’ footsteps.

“Sharice’s victory tonight will become a model for other LGBTQ leaders considering a run for office in red states or districts,” said Parker.