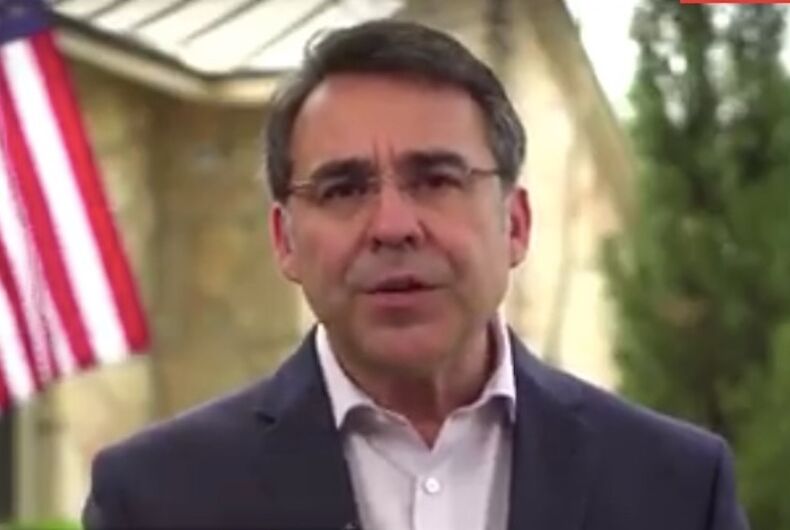 Mauro Garza, owner of the Pegasus nightclub in San Antonio, is apparently running as a Republican for a Texas congressional seat even though he failed in his 2018 campaign..

Garza is a self-proclaimed conservative and Log Cabin Republican whose most recent campaign for office was self-funded, using red ballcaps which read “Make TX-21 greater” as both a nod to his district and his support of Donald Trump.

Despite his conservative cred, the website OutinSA mentioned that he’d “contributed over $100,000 to local LGBT organizations” and that his campaign website contains no mention of LGBT issues.

However, OutinSA also points out that Garza’s campaign Facebook page (which still updates regularly) contained a post in which Garza wrote:

The only LGBTQ agenda I push is that of RESPECT. I do not wish to force Americans to understand our culture and various subcultures or even to accept them. However, I will continue to fight for the American Agenda that allows the Members of the LGBTQ Community to exercise our freedoms within the parameters of the laws in this great nation.

Garza’s Facebook page remains active, leading us to conclude that he may try another political bid in the future.

And yet Garza’s page also speaks out against Eric Porterfield, the West Virgina Republican delegate who recently said he’d drown his kids if they were gay. Garza called Porterfield’s comment, “outright disgusting,” adding, “To each their own when it comes to your sexuality. Government needs to stay out of the bedroom.”

It’s obvious that Garza is trying to position himself as a centrist, but we wonder how he’d respond to recent state Republican efforts to legalize anti-LGBTQ discrimination and efforts by state Democrats to expand civil rights.

Garza has previously run for office as a Democrat. His gay nightclub, Pegasus, was in the news last October for a shooting that happened outside of the bar. Three people were hospitalized with non-threatening injuries.