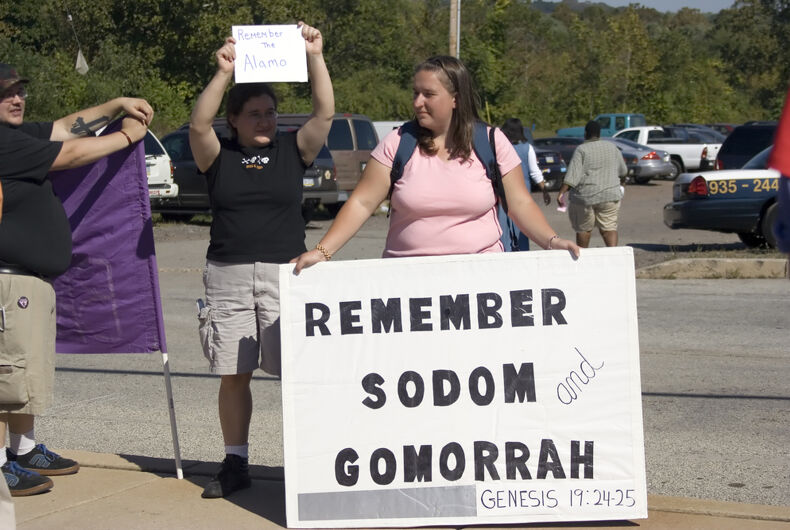 The bills, which each have about half a dozen co-sponsors, were introduced yesterday and cover a range of topics, including marriage equality and civil rights legislation.

One of the bills would ban state officials from granting marriage licenses to same-sex couples and define same-sex marriages as “parody marriages,” something South Carolina Republicans tried to do last year.

The other bill defines LGBTQ people as a religion and says that the rainbow flag is a symbol of a “faith-based worldview,” an argument that a conservative crackpot tried to use several years ago to get a court to ban members of Congress from displaying the rainbow flag.

The bills include a wide range of measures to reduce LGBTQ equality, like banning the state from recognizing transgender people’s gender identities, preventing municipal governments from banning conversion therapy or discrimination against LGBTQ people, and barring libraries and schools from hosting events like Drag Queen Story Hour.

The bills assert that LGBTQ people “erode community standards of decency” and “There are no ex-blacks but there are thousands of ex-gays.”

“The government’s endorsement of LGBTQ ideology has amounted to the greatest sham since the inception of American jurisprudence,” one of the bills says.

“Their marriage probably doesn’t affect me – their union or whatever you want to call it,” one of the bills’ co-sponsor Representative Randy Garber (R) told the Wichita Sun. He said that he was more concerned that LGBTQ people’s beliefs were being “forced” on him.

Tom Witt of Equality Kansas said that the bills are the “most vile, hateful and disrespectful legislation” he has seen in his career.

“Every year, we see bills that restrict, remove, and limit the rights of LGBT Kansans, but never have we seen this level of extremist vitriol laid out in legislative language,” Witt said.

“These bills combined are 18 pages of insults and name calling.”

Democrats don’t believe that the bills will pass the legislature. The Democratic governor of Kansas is unlikely to sign them.

Will this trans man’s baby be the first without a mother on the birth certificate?