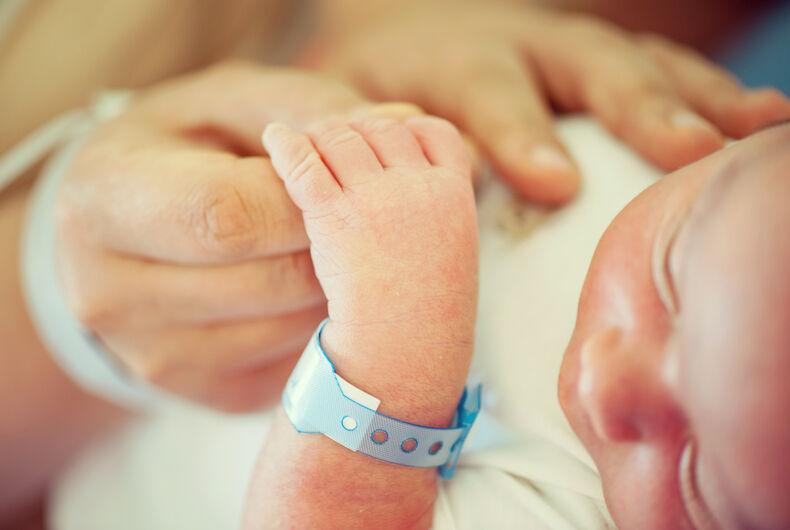 A U.K. court has ordered the government to review its policies after a trans man who gave birth was classified as his child’s “mother” on birth documents.

This week Andrew McFarlane of the Family Division of the High Court heard arguments in the case of a trans man fighting to be listed as his baby’s “father” or “parent” on vital records. Referred to pseudonymously as “TT” in court documents, the plaintiff became pregnant after undergoing IVF treatments.

At the time of his child’s birth, he had already successfully petitioned to the U.K.’s Gender Recognition Panel to be legally recognized as male.

The Registrar General still denied TT’s request to be recognized in accordance with his gender identity, however. The office claimed that listing him as the “father” would be against policy, as the parent who gives birth is typically classified as the “mother” on a child’s birth certificate.

Related: Doctor Who would have to wait years to legally transition to a woman in the UK

His lawyers claim the policy is outdated and out of step with the realities of trans lives.

“It is an accepted fact that a female who transitions to male may in law may maintain the ability to conceive and give birth to a child,” argued family law attorney Hannah Markham in a statement.

The current guidelines deprive the complainant of “his right to private and family life,” she continued.

Samantha Broadfoot, a representative of the AIRE Center legal advocacy group, added that the Registrar General’s decision was unfair to the children of trans people. She argued it harmed their “individual identity,” as well as their “moral and social security.”

As The Telegraph previously reported, Broadfoot particularly took issue with the fact that the officials with the registrar’s office proposed classifying TT as a “male mother.”

“It is utterly incongruous,” she said.

After the government put forward its defense of the policy on Wednesday, McFarlane ordered that Health Secretary Matt Hancock review regulations related to the 2008 Human Fertilization and Embryo Authority Act. The decade-old law mandates that women have sole access to fertility care, despite the fact that TT was legally recognized as a man during his IVF treatment.

“It is impossible to sit here and observe the factual evidence of this case and not invite the Secretary of State for Health and Social Care to consider the consequences of the Act on individuals like this,” McFarlane claimed.

“I am simply putting a marker down to invite the Government to look into this,” he said.

In addition to Hancock, “interested parties” named in the suit include Home Secretary Sajid Javid and Minister for Women and Equalities Penny Mordaunt. Neither have publicly responded to the judge’s order.

If TT’s request is granted after a months-long legal battle, his child will be the first in the U.K. without a mother on their birth certificate.

This is the first legal challenge of its kind in Britain, but other countries have already debated the issue. In 2017, Germany’s Federal Court of Justice ruled “the roles of father and mother are not interchangeable” in regards to a trans man, Oscar Müller, who had given birth to a son in 2013. Müller’s request to be listed as his child’s father was denied.

Germany has offered a third gender option on birth certificates since 2013, however. The U.K. has yet to rollout a gender-neutral alternative.

Kansas GOP introduces the ‘most vile, hateful & disrespectful’ anti-LGBTQ bills in the country