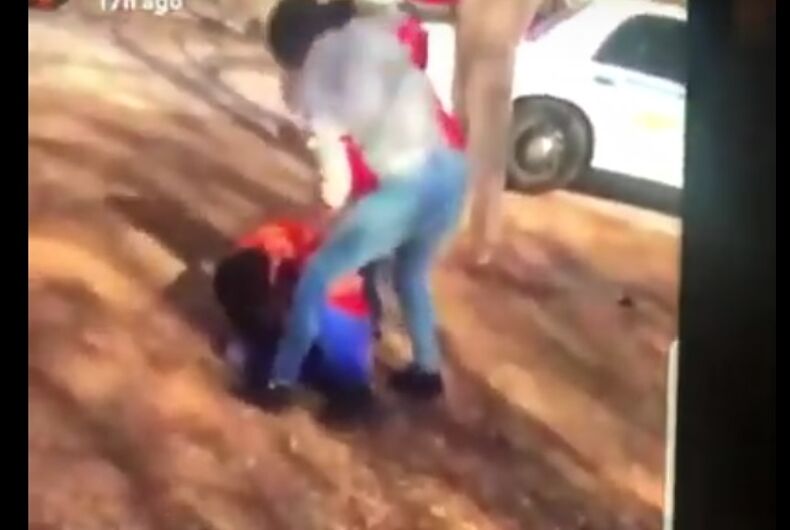 An 11-year-old girl in New Mexico has faced severe and violent bullying since she came out at school. This past Friday, she was beaten up at school and other students recorded it.

Savannah Tirre came out last October, and her parents say that they instantly accepted her.

“We said, ‘We don’t care, we just want you happy.’ It’s never been an issue in this family,” her mother, Chelsea Tirre, said.

It was so severe that her mother says she started having seizures and had to be taken to a pediatric intensive care unit for treatment.

Related: A trans teacher got PTSD after years of harassment & a rape threat. Now she’s suing.

Her parents put her in a different school in the district, but that didn’t help.

This past Friday, Savannah was beaten up at school. She said that the attack started when another girl punched her from behind and then beaten.

Another student recorded part of the attack and posted it to Facebook. In the video, Savannah is getting punched at least six times while some teachers blow whistles.

Comments on the Facebook post, which has been taken down, referred to Savannah’s sexual orientation, according to the Las Cruces Sun-News.

“This little girl is about to get jumped Monday again so get your phones out,” one commenter wrote, calling Savannah “a little lesbian.”

“My heart just dropped,” Chelsea Tirre said when she saw the video. She filed a police report, and one student at the school is being investigated.

When she returned to school on Monday, Savannah was escorted between classes by a staff member.

Chelsea Tirre said that a local organization has offered to counsel the bullies.

“Middle school, for girls, is tough, I get that, but I think this little girl needs to be set on the right path,” she said.

“I think she needs to be in some sort of program that can help redirect her. I don’t think she should be locked and put away. I hope her parents guide her in the right direction.”

A spokesperson for the school district said that they cannot comment on individual cases but said they take bullying “very seriously.”

Will this trans man’s baby be the first without a mother on the birth certificate?