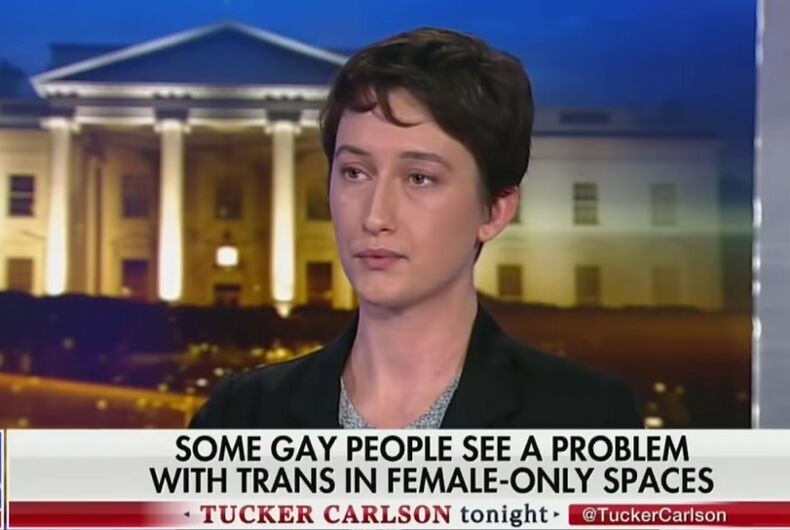 Last October, Beck was voted out of Baltimore’s LGBTQ Commission because she repeatedly made anti-transgender statements, like misgendering trans people and referring to trans men as lesbians who transition.

After she wrote a piece about what happened on the TERF website AfterEllen (no association with Ellen Degeneres), she has been getting national attention from conservative media.

Last month, she was one of four TERFs who sat on a panel at the Heritage Foundation, a far-right organization that opposes LGBTQ rights and women’s rights, where she complained about her treatment in the LGBTQ movement.

Conservative media outlets like PJ Media, The Daily Wire, and The Daily Signal all covered her appearance at Heritage.

Related: Twitter banned Drag Race’s Aja after she was attacked & misgendered by feminists

And this past Monday she appeared on Fox News on Tucker Carlson Tonight.

Introducing her, Carlson said that she was kicked off Baltimore’s “gay rights commission” for misgendering a rapist even though, even by Beck’s account, that was a minor part of what upset the other members of the board.

She opened by saying that she was only speaking “the truth.”

“I couldn’t agree with you more, and I’m grateful that you have that attitude,” Carlson responded.

Carlson, who once bragged about beating up a gay man, asked Beck if it is more difficult for her to oppose transgender rights because she’s part of the LGBTQ “acronym.”

They both agreed, without citing any evidence, that transgender people are a threat to cisgender women, and then Carlson called Beck “brave” because she agreed with him.

Kansas GOP introduces the ‘most vile, hateful & disrespectful’ anti-LGBTQ bills in the country