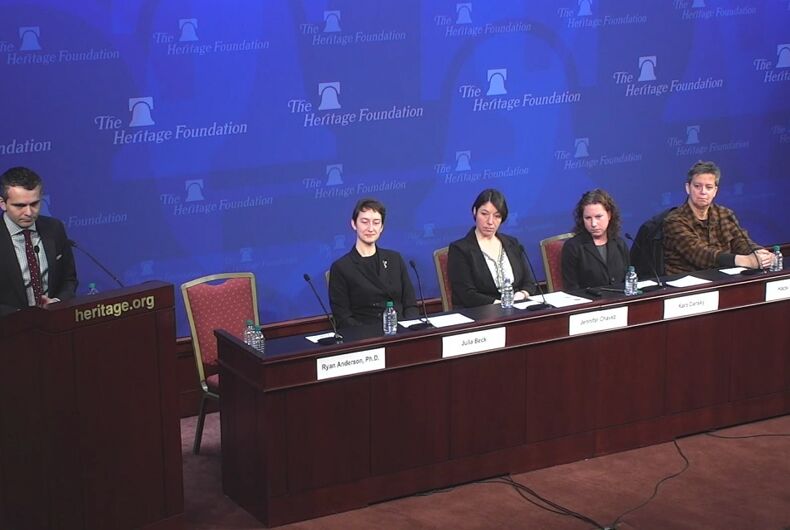 The Trans-Exclusionary Radical Feminists (TERFs) appeared on a panel at the Heritage Foundation’s office in Washington, D.C., entitled “The Inequality of the Equality Act: Concerns From the Left.”

But the panel didn’t discuss any concerns about the Equality Act other than that it includes discrimination protections for transgender people.

Three of the TERFs who appeared on the panel are associated with the group Women’s Liberation Front (WoLF). At least one of the women identifies as a lesbian and one panelist said that he used to identify as a trans woman but does not anymore.

Related: Here are the 15 dumbest theories about what makes people transgender

The discussion was moderated by Ryan Anderson, a far-right activist best known for his book When Harry Became Sally. That book, which accuses transgender activists of a “ruthless campaign to coerce anyone who dares to dissent,” relies on misinterpreting studies, myths, and gender stereotypes.

He has also written a book about why marriage equality is bad, complete with more bad data that he said show that gay and lesbian couples make bad parents.

Jennifer Chavez spoke after Anderson, and she called transgender identity “the new eating disorder” and “a mass craze.”

After Chavez, ex-transgender woman Hacsi Horvath spoke about how he misgenders and deadnames transgender people on purpose.

“I don’t care if it hurts their feelings,” he said, calling transgender identity a form of “gas-lighting” and adding that “Straight men are all about the trans, and you have to wonder what the heck is going on.”

Julia Beck talked about how her tenure on the LGBTQ Commission in Baltimore came to an end. She repeatedly made transphobic comments and misgendered transgender people and was eventually kicked off the commission.

On the Heritage panel, she said that in LGBTQ activism it is “far more criminal for me to call a male rapist ‘he’ than it is for him to rape.” It was a bizarre statement since she was talking about a trans woman who was convicted and sent to prison for rape, while Beck herself was convicted of nothing and not sent to prison at all.

Kara Dansky was the last panelist to speak and she actually addressed the Equality Act, which would ban discrimination on the basis of sexual orientation and gender identity.

She said that the bill should really be called the “Women’s Erasure Act” because the law “means effectively that women and girls will no longer exist as a coherent category worthy of civil rights protection.”

The audience asked a few questions and the Christian conservatives seemed appreciative of the self-described radical feminists.

Rightwing media has given the panel extensive coverage. The conservative PJ Media ran an extensive article about the panel that called the TERFs “liberals — radical feminists!” and “homosexual activists” (only one publicly identifies as gay). The article opined on “the Left’s increasingly intolerant orthodoxy,” implying that there is something wrong with an ideological movement wanting some ideological coherence.

The Heritage Foundation also opposes anti-discrimination laws, but for much more prosaic reasons: they believe that any legislation that protects LGBTQ people is “unjustified,” infringes on their “religious liberty,” and sends a message that it’s OK to be LGBTQ, which contradicts “traditional Judeo–Christian beliefs.”

TERFs usually dislike being compared to Christian conservatives, and Anderson justified their appearance by saying that no one on the left would host their panel discussion.

Of course, if the panelists just wanted to talk, they could have sat down in someone’s living room, filmed a few speeches, and posted them on YouTube.

Their appearance at Heritage shows that TERFs are less bothered about being associated with Christian conservatives today, and that their antipathy toward transgender people motivates them more than their concern for women’s and LGB rights.

A man was publicly executed. His crime? Gay sex.