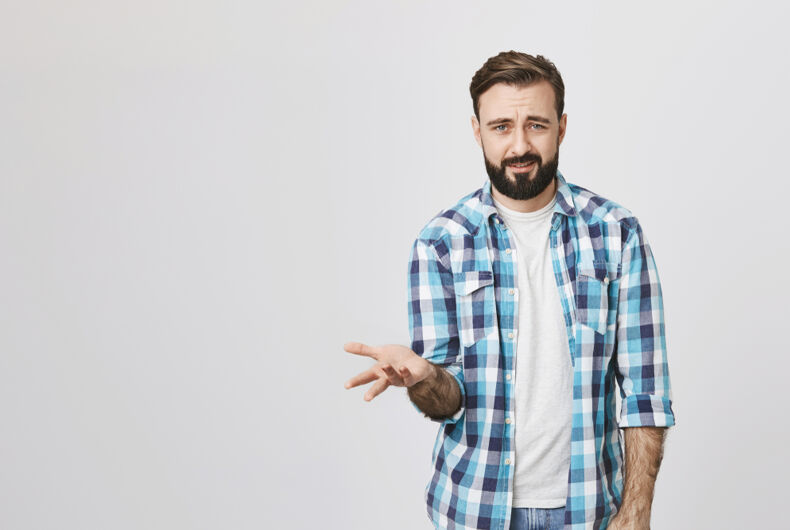 The consensus scientific answer on all three is unsatisfyingly vague; there is no single reason, and what we can see appears to be a combination of multiple factors involving genetics, epigenetics, oligogenetics, and potentially some environmental factors.

There is broad consensus that it’s not caused by bad parenting, or what your mom ate when she was pregnant, or not going to church enough.

However, this isn’t enough for random (and not so random) cranks to propose absolutely bonkers reasons for why people are transgender. Because the public and the media knows so little about transgender people in general, some of these are getting more play than they deserve.

So, in no particular order, here are 15 of the nuttiest suggested reasons for why people are transgender, and why they deserve to be laughed at rather than taken seriously for a nanosecond.

Remember how in the 80’s and 90’s homophobes thought that being around gay people would turn you gay? Same thing… except now it’s virtual! Because the internet is full of transgender predators recruiting and grooming children to become one of us. This got popular after one “study” showed that trans youth interacted with other trans youth online.  Shocking!

Remember Chaz being on “Dancing with the Stars” a few years back? It seemed like all the crazies crawled out of the woodwork to bemoan how Chaz would normalize being transgender and make people think being transgender was “cool” and give it a try because Chaz. And dancing.

Dr. Ray Blanchard has a spent a lifetime peddling weird ideas about the transgender community that never really caught on, except with other people who really hate transgender people as well.  Now that he’s no longer a practicing clinician or researcher the primary outlet for his theories is… Twitter. Just like our President, he’s another very stable genius.

Blanchard’s latest hypothesis is that watching anime somehow makes people transgender. Because some transgender people like anime, and people who are treated like outsiders are never drawn to cultural touchstones for outsiders. By this logic, Star Trek: The Next Generation probably made all the Gen-Xers trans people.

Stupid Idea #4: Goth culture disappeared because they all turned transgender

Another one of Blanchard’s Twitter ramblings claims that Goth culture disappeared because they all turned trans…and certainly not because they got jobs, got married, had kids, and basically did all the things that people do when they get older.

Stupid Idea #5: A world that accepts transgender people is worse than one run by Mike Pence

It takes a rather special sort of feminist to align yourself with the religious right, because you’re more afraid of the consequences of transgender people being accepted than you are of people like Mike Pence being in a position to do what they want with women’s bodies and to enforce gender norms via religious opprobrium.

But, TERFs (Trans-Exclusionary Radical Feminists) are so very special: they are absolutely convinced transgender people will end humanity, and that after finishing transgender people off, the religious right definitely won’t have enough power or desire to do anything that bad to women or LGB people. Basically, in their minds, it’s worth the risk of turning the US into the Republic of Gilead just to have the peace of mind that there are no transgender people sharing a bathroom with you.

What the [email protected]#$ kind of feminism is that?

The icky little world of Men’s Rights Advocates, Incels, and Jordan Peterson fans produces some bizarre, irrational, and dangerous ideas. Among the more bizarre is that transgender women are just “beta males” who transition in order to gain access to “female privilege.”

After the Brett Kavanaugh hearings, it should be obvious to everyone how much “privilege” that entails.

Back in the day in 2017, blaming “transgenderism” on Satan and demons was the province of snake handling churches in Arkansas, preachers who say God commanded them to get another private jet, and Trump administration judicial nominees. We can thank Dr. Ray Blanchard for expanding the audience a bit by tweeting that exorcisms and detransition sound like pretty much the same thing to him.

Worst sales pitch ever: “Hey, since I came out as trans I’ve been forced to hold my pee until I get life threatening bladder infections, beaten, sexually assaulted, insulted by teachers and the administration, and banned from participating in school athletics. The Secretary of Education is working hard to ensure that everyone has a religious right to discriminate against me as well. You should definitely try experimenting with gender too!”

This is why 75% of transgender students feel unsafe at school.

The next idiotic supposition combines anti-Semitism with globalist conspiracy theories. Namely, that there is a secret plot to destroy the world with gender ideology using Jewish lucre from billionaires George Soros, Jennifer Pritzker, and Martine Rothblatt. Their evidence? Um… some of them give to Planned Parenthood, liberal universities, and the ACLU.

Normally, people who engage in “Big Pharma” conspiracy theories (e.g. they’re hiding the cure for cancer!) aren’t allowed in the building, much less given the microphone in a debate over public health policy. Yet… here we are.

This is dumb on so many levels. First, in the US, how do you make money off a tiny sliver of the population that doesn’t have any money to begin with? Second, estrogen is generic and ridiculously cheap already. Finally, in everywhere else in the world but the US, national health services already provide care and profits are relatively low.

These are corporations. Why would they put so much money into something with so little profit in it?

Another one brought to you by the Jordan Peterson crowd that spends their days navel gazing about where “beta males” come from and how women ruin everything.  The logic (if you could call it that): soybeans have minute amounts of phyto-estrogens, and therefore eating food with soy in it feminizes you through the magic of super science.

Here’s one from the anti-vaxxer crowd (because you just knew it was coming).  Their hypothesis is that because vaccines contain DNA and RNA, they mutate human sex chromosomes, replacing X’s with Y’s and vice versa. In terms of plausible origin stories, this is on a par with being bitten by a radioactive spider (or transgender person).

Because everything eventually devolves into chemtrails. It’s like the Godwin’s Law of conspiracy theories.

I’m not sure what sort of therapist tells their clients to do things that will make their lives exponentially more difficult and complicated.

Stupid Idea #15: People are transitioning because it’s a fad or a social contagion

If you hadn’t noticed, the Trump administration is running the show. This theory makes as much sense as converting to Judaism in 1930’s Germany because you saw a lot about it in the news. (Plus, the one study purporting to show this is a hot anti-transgender mess of deliberately biased samples, deceptive questions, and unsupported conclusions.)

He came out to 1500 people at his Catholic school’s assembly. The reaction was priceless.