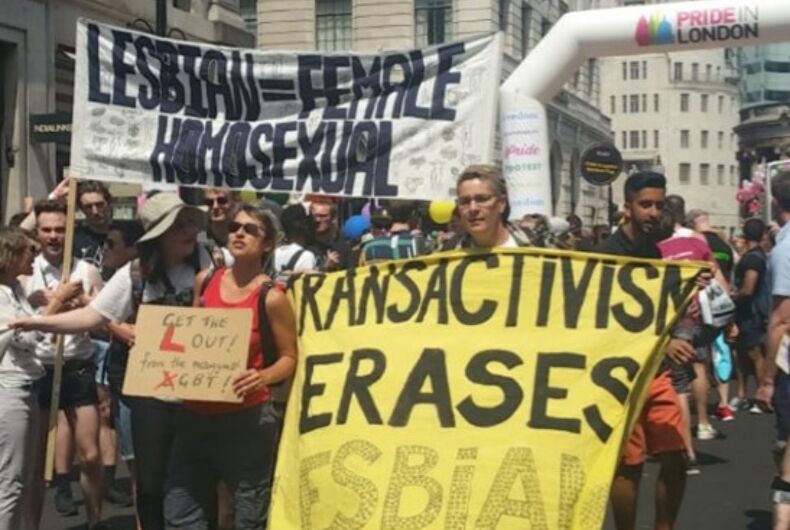 A transphobic group of lesbians called "Get the L Out!" hijacked the Pride in London parade. Photo: Twitter/Fuzzy_Logic_

A group of lesbian editors and publishers have put out a statement in support of transgender people.

The people in charge of several publications, like DIVA Magazine in the UK, Autostraddle, and Curve, have signed a “Not in our name” statement that denounces TERFs in lesbian media.

“TERF” refers to “trans-exclusionary radical feminist,” or someone who uses the language of feminism to advance transphobia, usually with arguments about how trans women “invade” women’s spaces in order to rape women or how trans men are women trying to claim male privilege. TERFs can be straight, bi, and lesbian.

The publications “believe that trans women are women and that trans people belong in our community. We do not think supporting trans women erases our lesbian identities; rather we are enriched by trans friends and lovers, parents, children, colleagues and siblings.”

The statement is a response to recent criticism AfterEllen has received for transphobic tweets and articles.

The site, which is not associated with Ellen DeGeneres, has several transphobic articles currently linked on its front page with titles like “Girl Dick, the Cotton Ceiling and the Cultural War on Lesbians, Girls and Women” and “How I became the most hated lesbian in Baltimore” (tl;dr version: people hated her because she’s transphobic).

The site has also come under fire for linking transphobic content on Twitter, like linking this video that links transgender identity and bodies with sexual assault on women.

These articles and tweets led to AfterEllen getting called out on Twitter.

If you aren’t aware, AfterEllen used to be a cool lesbian/bi content website years ago. It was bought out, changed management and now spews regular transphobic articles. Original creators & recent contributors have made public statements in opposition to it due to this. pic.twitter.com/3OplYAwvYG

By being a terf? Good. Can’t stand the heat, don’t be a bigot.

The full statement is below.

Following further vitriolic attacks on trans people in our media, the world’s leading publications for lesbians are coming together to send an unapologetic message of support and solidarity to the trans community.

DIVA, Curve, Autostraddle, LOTL, Tagg and Lez Spread The Word believe that trans women are women and that trans people belong in our community. We do not think supporting trans women erases our lesbian identities; rather we are enriched by trans friends and lovers, parents, children, colleagues and siblings.

We strongly condemn writers and editors who seek to foster division and hate within the LGBTQI community with trans misogynistic content, and who believe “lesbian” is an identity for them alone to define. We condemn male-owned media companies who profit from the traffic generated by these controversies.

We also strongly condemn the current narrative peddled by some feminists, painting trans people as bullies and aggressors – one which reinforces transphobia and which must be challenged so that feminism can move forward.

We are really concerned about the message these so-called lesbian publications are sending to trans women and to young lesbians – including trans lesbians – and we want to make in clear this is not in our name.

As the leading publications for queer women, we believe it is our responsibility to call out scaremongering conspiracy theories levelled at the trans community, and make it clear that DIVA, Curve, Autostraddle, LOTL, Tagg and Lez Spread The Word will always be safe spaces for the trans community.

Forty years ago, to be a lesbian was to be questioned and persecuted. Today things are better for cis lesbians but there are still places where to be a lesbian is difficult or impossible.

So it is for trans men and women, as well as non-binary people, many of whom identify as lesbian, bisexual, gay or queer. We know something of these struggles. And just as they and other allies have supported us, so we must support those among us who are trans, or risk ending up on the wrong side of history.

The sooner we stop focussing on what divides us and instead focus on our commonalities, the stronger we will be to confront the other injustices imposed on us.

We won’t be divided.

The first ‘Christian airline’ is about to take off. Will it be used to spread anti-LGBTQ hate?

Trump wants supporters to call him & say nice things. You could call too.