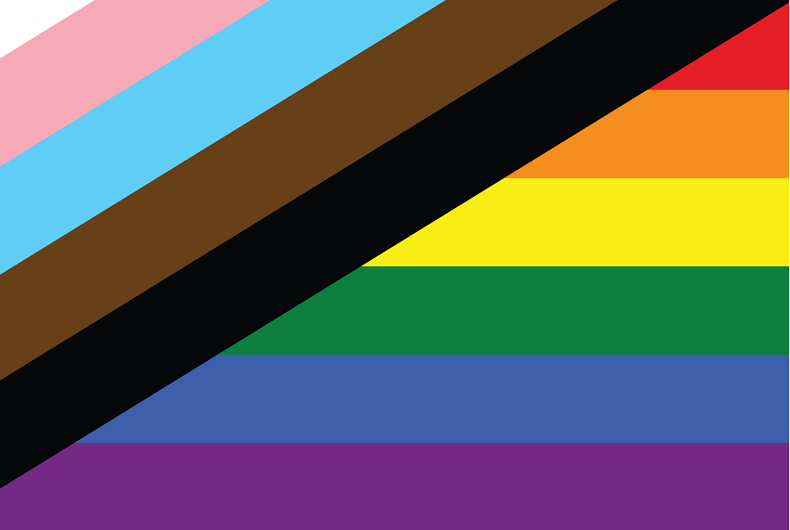 A new rainbow flag design is being promoted on KickStarter that purportedly respects Puerto Rico.

Based on an idea from Puerto Rican author and vegan activist Julia Feliz and designed by Hayley Brown, the flag is intended to “center trans and queer people of color.”

Feliz started the KickStarter campaign to raise $5000 to pay for stickers, pins, and 4-by-6-inch flags.

If the design appears familiar to LGBTQ Nation readers, that’s because we reported on Daniel Quasar’s KickStarter campaign this past June to raise funds for xyr flag design (Quasar identifies as nonbinary and uses xe/xem pronouns).

That design placed black, brown, blue, pink, and white stripes over the six-striped rainbow, but the new stripes were in the form of a chevron instead of diagonal lines “to show forward movement.”

Feliz and Brown’s design has strong similarities to Quasar’s design, using the same five stripes to represent people of color and transgender people, and even placing them in the same order as Quasar did.

Feliz and Brown do not mention Quasar at all on either the KickStarter campaign page or on the website created to promote their flag.

AC Baker, who is a nonbinary trans person, told Gay Star News that Quasar’s design appropriates the Puerto Rico Pride flag, which also has a chevron on top of the six-striped rainbow flag.

“This cultural and financial theft from the LGBTI community of Puerto Rico is an act of white supremacy,” Baker said.

Quasar said that any similarity in the designs is “entirely coincidental and unintentional.”

Xe said that xe has donated to Feliz’s campaign.

“I sincerely hope they make their goal. The more flags, the more discussion, the better,” xe said.

The chevron is fairly common in flag design. Several countries have chevrons on their national flags, including Czech Republic, Zimbabwe, and the Philippines.