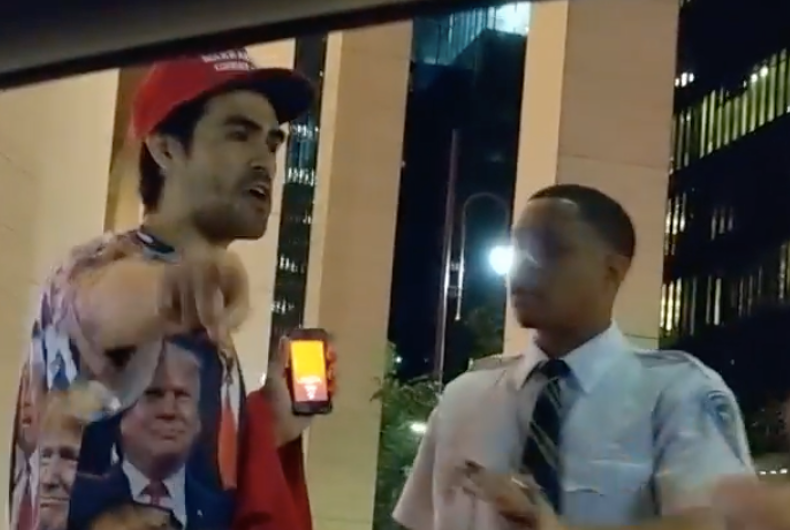 A gay Trump supporter is being investigated by police after he allegedly wielded a knife at someone who attended a Kathy Griffin show earlier this week.

Richard Nunez said in a video on YouTube that he, his wife, and some friends were leaving a Kathy Griffin show at Jones Hall in Houston on Monday night when they saw someone wearing a Donald Trump shirt and a MAGA hat. He claims that the man was within the concert venue, beyond security.

Nunez said that they made a few comments among themselves about the man’s attire, and he heard them and responded, “Do you want a political debate?” They left instead.

Nunez went to get his car to pick up the rest of his group, which was waiting by the curb. His wife Michelle got into the passenger seat, closed the door, rolled down the window, and said “Hey asshole, fuck Trump” to the Trump supporter, who was leaving the venue.

The man responded, “Fuck you, fucking cunt,” and approached the car. Nunez said that he kicked the door and Michelle started to raise the window.

“The Trump supporter had some sort of switch bladed knife on him and jabbed it at the window, but luckily the rising window shielded my wife from the stab,” he said.

Dashcam footage provided to OutSmart, an LGBTQ publication in Houston, confirms parts of Nunez’s account with audio, although it did not capture video of what was happening on the side of the car.

A spokesperson for the Houston Police Department confirmed that the incident occurred. The Trump supporter was Carl Pacheco, a self-identified gay, latino immigrant.

The spokesperson said that Pacheco wasn’t trying to stab Michelle Nunez, but was instead “poking at the window.”

Pacheco told OutSmart that he is “cooperating with the police investigation” and that he didn’t do “anything wrong based on the laws and the circumstances of what happened.”

His lawyer, Michael Mercer, said that Pacheco went to the concert venue with a knife “expecting to be able to have political conversations” and blamed the Kathy Griffin fans, who “had too much to drink and got offended.”

Michelle Nunez said that she does not drink alcohol.

“You should have the right to go express yourself at a concert, as long as you do so peacefully and politely,” Mercer said. “Hopefully the police will give us an opportunity to tell our side of the story.”

Pacheco added that it’s the “white middle-aged people” without knives who are being presented as the victims of the incident, while he is being “demonized.”

Houston police said on Wednesday that their investigation is still open.

Nunez, who posted the dashcam video to YouTube after the incident, took it down after HPD asked him to.

Could this Pride flag that ‘respects Puerto Rico’ replace the rainbow flag?