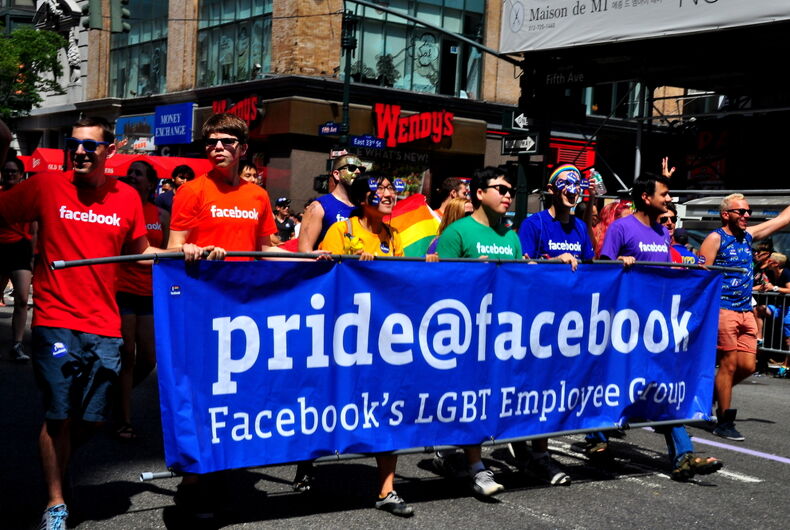 Pride Facebook group with their blue banner at the 2014 LGBT Pride Parade on Fifth Avenue in NYC.Photo: Shutterstock

Facebook is building its new data center in the very anti-LGBTQ state of Alabama. What does this mean for LGBTQ rights? What does it mean for Facebook?

Facebook is dropping a $750 million data center in Huntsville, Alabama, bringing money and jobs to the state in a way only an internet behemoth can. It also shines a spotlight on the state.

As governor Kay Ivey said in her announcement, ”Every day, millions of people around the world use Facebook’s products, and this new Alabama data center will soon play a role in keeping the company’s popular platforms running flawlessly.”

In fact, Alabama has recently passed anti-LGBTQ legislation. Governor Ivey signed a law to allow faith-based organizations to refuse to place children with LGBTQ parents on religious grounds. The state Senate passed a bill doing away with marriage licenses, to spite LGBTQ couples.

Compare this to the question of where to place Amazon’s new headquarters. Several cities are being considered as possible locations. There has been a considerable push to ensure that LGBTQ inclusion is a deciding factor in where it goes, and disqualify cities in states without LGBTQ protections. That’s why Indianapolis has probably lost their chance after state Republicans keep attacking LGBTQ people.

Large companies with diverse workforces, like Facebook and Amazon, have an apparent interest in doing, and perhaps even an obligation to do business with states where their LGBTQ employees are protected. If they want to retain and attract talented employees, it’s just good business sense.

Winning significant economic investments from large companies has been an incentive for states to extend protections to LGBTQ people. They have been the carrot encouraging progress, while the loss of such opportunities has been the stick applied to states that instead pass discriminatory laws. (See: North Carolina.)

It’s not likely that Facebook’s decision to build a data center in Alabama will encourage the state to step into this century. After all, Alabama got Facebook to invest in the state without having made any progress towards equality. Why should Alabama change now?

Most likely, Facebook employees will have to work at that data center without protections against discrimination and harassment. Maybe Alabama and Facebook gain something from this decision, but LGBTQ workers still lose.