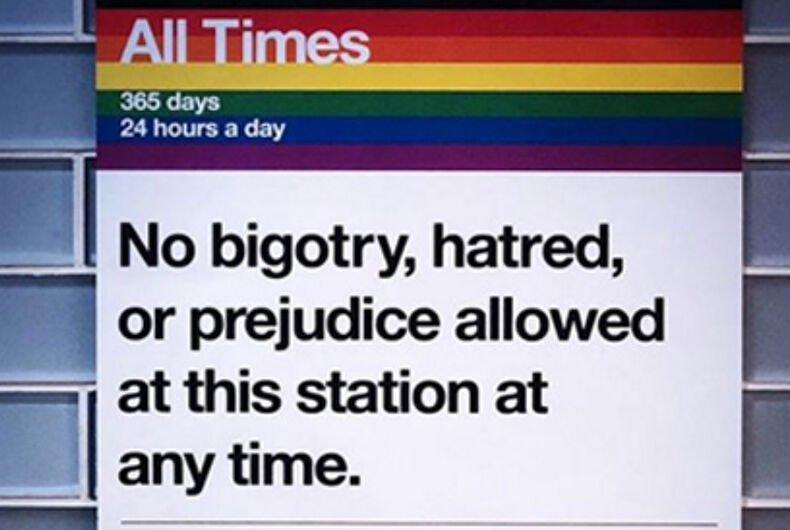 Pride Train, a New York-based guerrilla art collective, has taken to the subway for their second year, adding their own pro-LGBTQ message to the transit system.

Their signs, sporting a rainbow flag motif, declare that, “no bigotry, hatred, or prejudice allowed at this station at any time.”

The signs then follow up with humorous additional information, such as directions to JFK airport so that homophobes can take a flight “far, far away,” or reminders to “tip your drag queen.”

The signs are surreptitiously placed in stations, sometimes alongside official transit advisories posted by the MTA. In addition to the signs, the collective has sometimes placed rainbow flag stickers on the cars themselves, and rainbow “speech bubble” stickers on system wide advertisements.

The project is the brainchild of Thomas Shim, Ezequiel Consoli, Jack Welles, and Kyle Harrison. The four hail from the School of Visual Arts (SVA).

Pride Train started in 2017, after the Trump administration refused to issue a declaration proclaiming June as pride month. They felt it was necessary to stand up in the face of hatred and bigotry.

“We came up with this idea after noticing a growing number of hate crimes,” said the collective in a statement on the SVA website. “We love this city and we all felt like we needed to do something to let everyone know that there are still good people in the world, with a good heart, that care about everything they do.”

“To let them know that they are loved and that, no matter what our current government says, New York has been and will always be a safe space for our differences to be cherished and valued.”

Last year, MTA officials would remove the signage from stations. They appear to be taking less action against Pride Train efforts in 2018 — though they do remove the collective’s signage eventually.

LGBTQ teens who aren’t out engage with social media less

Why is Facebook opening a data center in one of the most antigay states?