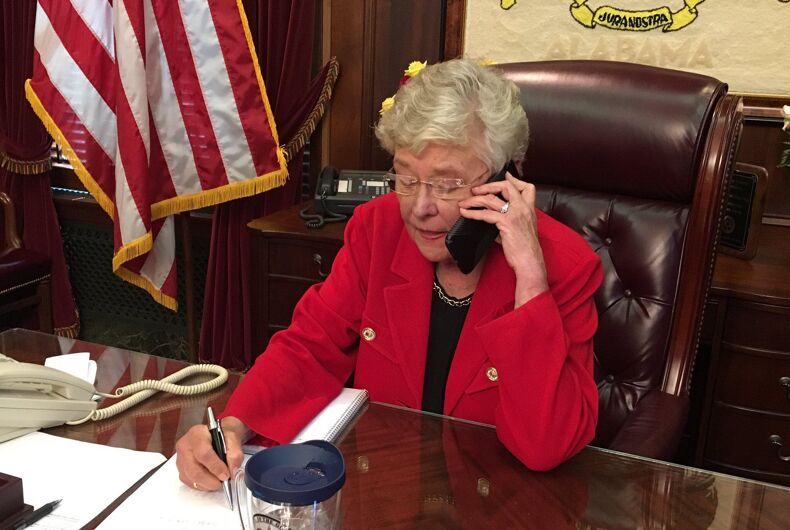 Alabama on Wednesday became the latest state to protect faith-based adoption organizations that refuse to place children with gay parents or other households on religious grounds.

Under the legislation signed by Gov. Kay Ivey, state officials cannot withhold a license from faith-based adoption groups that refuse placements based on their religious beliefs.

“I ultimately signed House Bill 24 because it ensures hundreds of children can continue to find forever homes through religiously-affiliated adoption agencies. This bill is not about discrimination, but instead protects the ability of religious agencies to place vulnerable children in a permanent home,” Ivey said in a statement.

South Dakota, Michigan, North Dakota and Virginia have passed similar laws. The protections in Alabama would apply only to private agencies that don’t accept state or federal funds.

The bill passed with heavy support in the Alabama Legislature, but drew criticism from advocacy groups — as well as the state’s only openly gay lawmaker — who said it puts the religious beliefs of the placing agencies above the needs of the child.

“We are deeply disappointed that the legislature and the governor took on this unnecessary, discriminatory bill instead of focusing on how to improve the lives of all Alabamians, no matter who they are or whom they love,” said Eva Kendrick, state director of the Human Rights Campaign Alabama.

Kendrick said that besides gay couples, it would let the agencies refuse placements to mixed-faith couples, single parents, divorced people or others whose family structure conflicts with the agency’s religious beliefs.

Ivey took office last month after the sudden resignation of the state’s governor amid an impeachment push in the fallout of an alleged affair.

David Dinielli, deputy legal director for the Southern Poverty Law Center, a Montgomery-based civil rights organization, said the group is disappointed that one of the first bills that Ivey signed was “to target LGBT kids and stigmatize LGBT families.”

Rep. Rich Wingo, the Republican sponsor of the bill, said it would protect faith-based groups such as Agape and Baptist Children’s Homes, which do adoptions and foster care placements.

Wingo said he believes faith-based adoption agencies should be able to place children in accordance with their religious beliefs, and he is thankful to Ivey for supporting religious liberty.

“It allows them not to place children in homes that go against their faith,” Wingo said.

Wingo said he disagrees with the criticisms that the bill was discriminatory because he said most placements are done through secular groups.

“Same-sex couples would make it all about them. It’s not,” Wingo said.