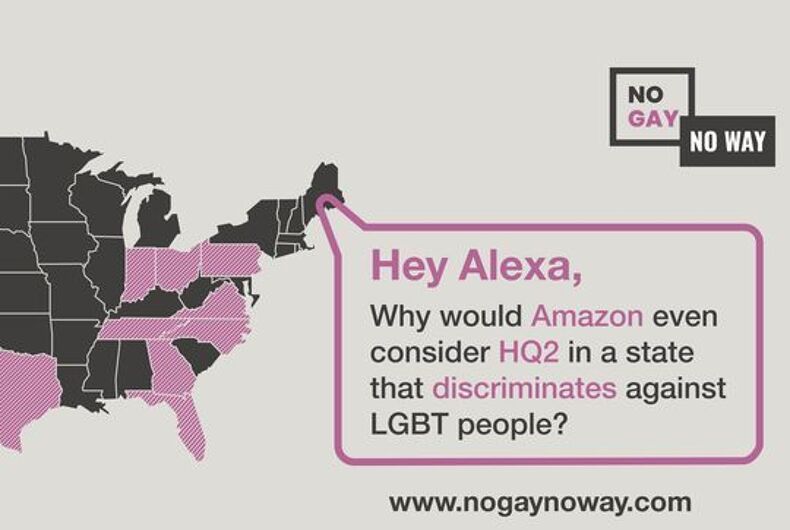 Should cities in states that don’t protect LGBT people from discrimination still be considered for Amazon’s second headquarters? Activists from across the nation are coming together to send a clear message to the e-retailer as they consider the options: “No Gay? No Way.”

The tech giant has been a leader in using corporate influence to benefit the LGBT community and has had a queer employee resource group for over a decade. So why are they considering locations that would take away the civil rights of any employees transferred out of the Seattle office?

“We were frankly just stunned that a company with such a great track record of equality and diversity had put all these states into the mix,” Conor Gaughan, the ad-hoc campaign’s manager told USA Today.

Nine out of the twenty finalists for Amazon’s HQ2 are in states that offer no protections for LGBT people. Some of the states are actively hostile to civil rights.

Indiana voted down a proposed hate crimes law this week because it included sexual orientation and gender identity. The state recently faced a national outcry when it passed a law that would have allowed business owners to discriminate against LGBT people.

Public schools in Texas are required to teach students that homosexuality is unnatural and unacceptable. Tennessee state law prohibits local governments from enacting nondiscrimination laws that include LGBT people.

Amazon’s requirements for the new location were clear, saying it requires “a compatible cultural and community environment” that includes “the presence and support of a diverse population.” Now advocates want them to comply with their own standards.

The coalition of activists plan a protest outside of Amazon’s headquarters in Seattle today, complete with a plane waving a “No Gay? No Way.” banner behind it. They will also be placing billboards on trucks to drive through Seattle streets with the logo emblazoned on them.