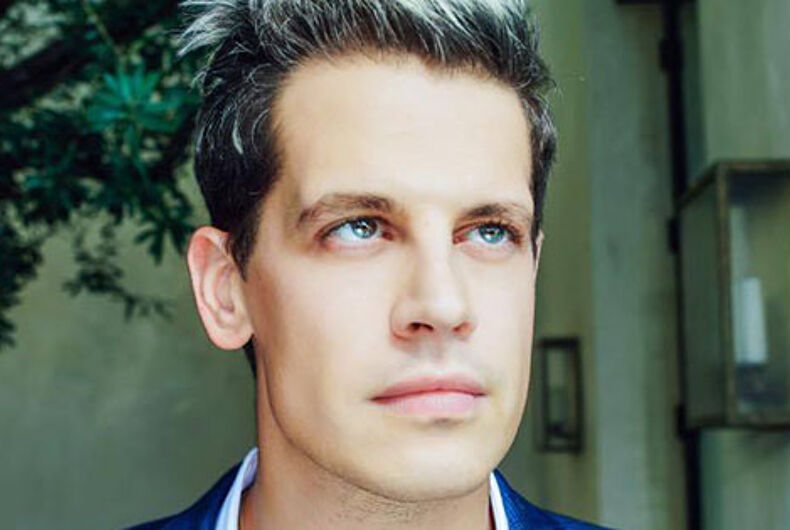 Oh, how the mighty have fallen. At the beginning of last year, Milo Yiannoupolos was sitting on top of the world. He held a powerful perch at Breitbart News and had a $250,000 boook advance from Simon & Schuster. Then the tape surfaced of him making light of sex between underage boys and men, and it all came tumbling down. No more Breitbart, no more book, no more deep-pocketed conservative supporters.

Still, an alt-right boy has to make a living. So now Milo is shilling vitamins on Infowars, the conspiracy-fueled streaming site run by Alex Jones. The product, called Icuren, is a liver and kidney “cleanse.”

“The best endorsement I can give you is that I’m very careful about what I put inside myself,” Yiannoupolos said, apparently without irony, to the Infowars audience.

Milo is selling supplements on Infowars. This is not a drill. pic.twitter.com/zieQXOqtRi

Jones is notorious for his homophobia and transphobia. Among his greatest hits:  lesbians torture women and eat their brains, and gay men are deliberately infecting each other with HIV as part of a Satanic plot. Jones is better known for his unhinged conspiracy theories, such as his belief that Michelle Obama is transgender and murdered Joan Rivers.

While Yiannoupolos is used to hanging around with homophobes, Jones is a bridge-t0o-far for most conservatives. It’s a sign of how desperate Yiannoupolos must be to find a new gig.

That said, Jones apparently makes a fortune selling supplements, enough to eschew advertising and support his media enterprise. In that sense, he’s part of a rich tradition on the right of hucksterism.

Mike Huckabee pushed “Biblical” supplements that could “reverse diabetes”. Ben Carson used his medical credentials to plug a supplement that he claimed cured his prostate cancer. Plus there’s a lucrative line in stock tips and precious metal sales, all capitalizing on the apocalyptic fears of the right wing media’s captive, often elderly, audience.

So, who knows? Maybe Yiannoupolos will recoup his lost income by cleaning out elderly kidneys. He sure won’t make it from his lawsuit against Simon & Schuster. Just days before pitching Icuren, he dropped his $100 million lawsuit without getting a dime in return.