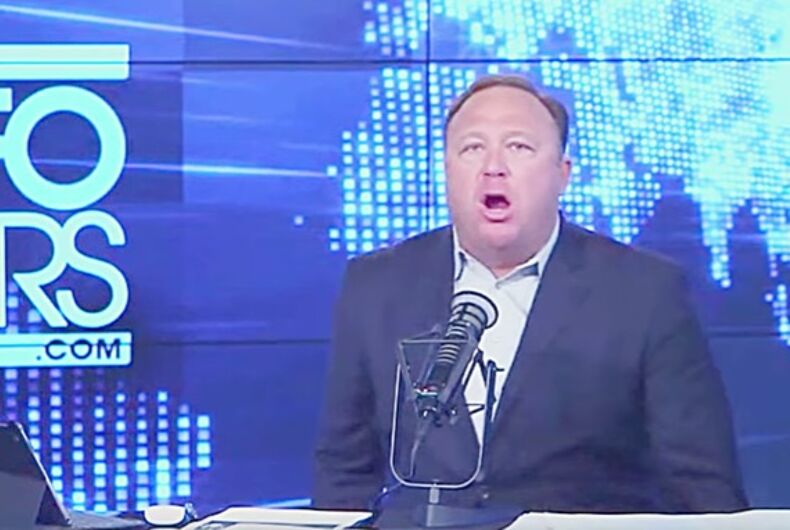 Conspiracy nut and admitted “performance artist” Alex Jones, whom Trump has praised, is off the rails again. Or, he would be, if he were ever on them.

This time he’s got himself in a tizzy over California’s decision to lower the penalty for knowingly exposing someone to, or infecting them with, HIV.

Gov. Jerry Brown signed the law on Friday, moving the offense from a felony down to a misdemeanor.

Jones, citing a Rolling Stone article that has been debunked for relying on questionable data and reportedly misquoting one of its primary sources, claims the reason for the HIV epidemic is because of how popular it is to pass it to others.

“The reason you have HIV is because it is a culture now in the gay community…to give other people HIV,” Jones says.

He is talking about what is often referred to as “bug chasing,” which has been shown to be much more popular in the minds of people like him than in reality.

For all the myriad of reasons for high rates of HIV infections, particularly in disadvantaged communities, neither people intentionally seeking it out nor infection others is even close to what’s truly to blame for the continued crisis.

“I want to get into the psychology of the insane Democratic Party here, because when HIV goes from lowered numbers like it is to exploding in the next five years, in a few years, if we’re still here, as a planet, don’t have nuclear war, I will go back to this show and say here I am in 2017 saying within three to five years California will have a 200 percent increase in HIV,” Jones said. “And they will also complain and say we need single-payer, we need socialist health care, the reason we have HIV is because we don’t have free health care.”

Advocates say that laws that severely criminalize HIV transmission have been shown to result in a decrease in people choosing to get tested, and that they disproportionately penalize people of color, especially African American men.

Watch Jones hyperbolically predict the end of civilization for the millionth time in the video below.