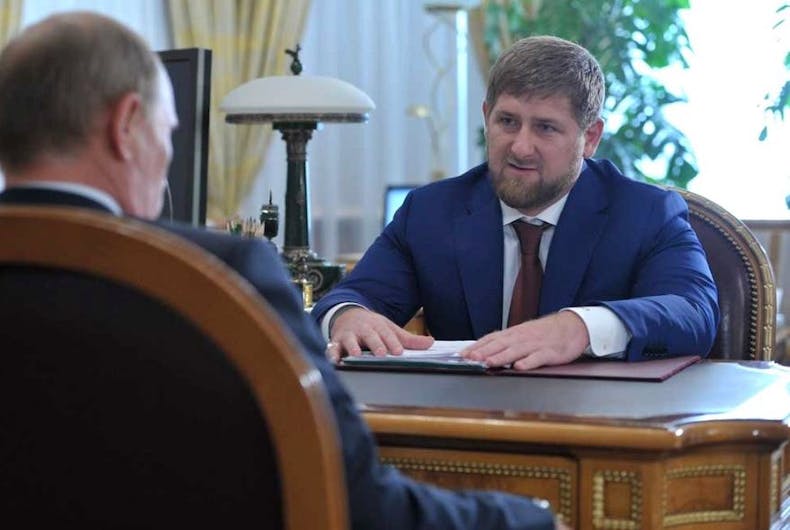 The White House says it was concerned at remarks by the leader of Chechnya who suggested any gay people in his Russian republic should be shipped to Canada.

Chechen leader Ramzan Kadyrov has faced international criticism since a Russian newspaper reported this spring that his security forces had detained some 100 gay men, torturing or killing some of them. The Associated Press has spoken to some of the victims.

In an interview over the weekend Kadyrov insisted there are no gay people in Chechnya and added that if “there are any, taken them to Canada.”

The State Department also released a statement in April saying it was “increasingly concerned” about the situation in Chechnya.

U.N. Ambassador Nikki Haley spoke out against the reports back in April.

Top Senate Democrats urged President Trump to address Russia’s meddling in the U.S. presidential elections in 2016 in his meeting with Russian President Vladimir Putin. LGBTQ rights advocates pushed him to bring up the abuses of gay and bisexual men in Chechnya.

The White House was quick to note that Trump had addressed the election meddling, but there was no word on Chechnya.

Meanwhile, Trump has stayed silent publicly, even while other world leaders, such as French President Emmanuel Macron and German Chancellor Angela Merkel, the latter of whom pressured Putin on Chechnya in front of reporters.

And for all their talk of concern to reporters and through press releases, Secretary of State Rex Tillerson admits he hasn’t raised the issue with the Russians.

President Trump also failed to mention Chechnya when he invited Russians into the Oval Office, where he shot himself in the foot not once but twice, by spilling intelligence information as well as admitting he fired former FBI director James Comey over the Russia investigation, and not over his handling of Hillary Clinton’s emails.

Further, the United States is reportedly not willing to take in any of the gay and bi men fleeing the abuses in Chechnya.

But don’t worry, queer men of Chechnya, the State Department is “upset” and “concerned” on your behalf.

Why do hotels put a book calling for the execution of LGBT people in every room?