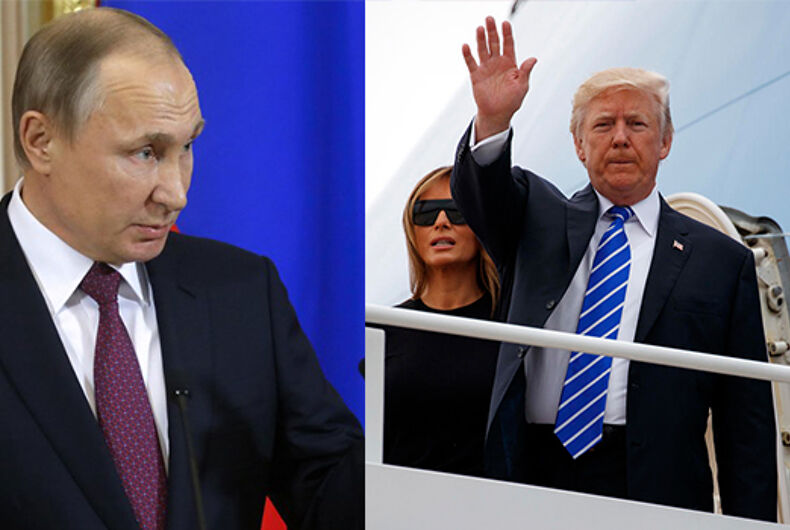 Russian President Vladimir Putin and Trump will meet this weekend and the topics of discussion are yet to be seen. Photo: Associated Press

President Donald Trump is set to meet with Russian President Vladimir Putin during this weekend’s G20 summit in Germany, and the topic of conversation is being widely speculated upon.

Top Senate Democrats have sent Trump a letter urging him to include in that meeting the issue of Russian meddling in the 2016 presidential elections.

.@POTUS meets with Putin tomorrow & he must discuss the elephant in the room: Russia's interference in our 2016 election. Our letter here: pic.twitter.com/uZ6joPG4zD

“President Putin directed an attack on the most central tenet of our democracy — our election. Not raising this matter with President Putin would be a severe dereliction of the duty of the office to which you were elected,” reads the letter, signed by Democratic Sens. Chuck Schumer, Dick Durbin, Ben Cardin, Jack Reed, and Mark Warner.

They said that the United States must “use every tool at our disposal to ensure that Putin does not believe he has a freehand to implement his manipulative program of election interference ever again.”

The interference by the Russians benefited Trump, suggesting it is anything but a foregone conclusion that he will raise the issue with Putin.

Trump was asked about Russian meddling in a press conference with Polish President Andrzej Duda, where he said he believed “it was Russia” but also “probably other people and or countries.”

When pressed by reporters as to why he won’t agree with intelligence agencies who say it was Russia, without leaving the type of wiggle room Trump seems to leave, he pivoted to an attack on false reporting and on former president Barack Obama.

Trump asked why Obama didn’t take action against Russia when he learned of election interference during the 2016 presidential campaign, saying he only chose not to do so because he assumed Hillary Clinton would win.

While progressives have criticized Obama for not taking stronger action against Russia, it is not true that no actions were taken. The Obama administration closed Russia recreational compounds in the U.S. and kicked out 35 Russian diplomats thought to be involved in the meddling, as well as launching a secret program to “cyberbomb” the country’s technological infrastructure.

Watch: Trump is asked if he believes Russia interfered in our election, instead attacks Obama and the media. https://t.co/IrfviRPwru

“NBC is equally as bad [as CNN],” he said. “Despite the fact that I made them a fortune with The Apprentice, but they forgot that.”

Trump attacks the media, CNN and NBC, in Poland: "They have been fake news for a long time." pic.twitter.com/xCxaUDE9pT

Fox News, on the other hand, appears to be widely ignoring the Russian election interference controversy, instead focusing on what should be discussed between the two presidents.

LGBTQ rights advocates, including the Human Rights Campaign, are also pushing for Trump to bring up the abuses and killings of gay and bisexual men in Chechnya.

HRC president Chad Griffin released an open letter of his own on the topic, and the group tweeted out a message encouraging followers to send an email urging Trump “to protect human rights at home and abroad.”

While U.N. Ambassador Nikki Haley has condemned the reported abuses, the president has far remained silent, unlike some other world leaders, like German Chancellor Angela Merkel, and French President Emmanuel Macron.