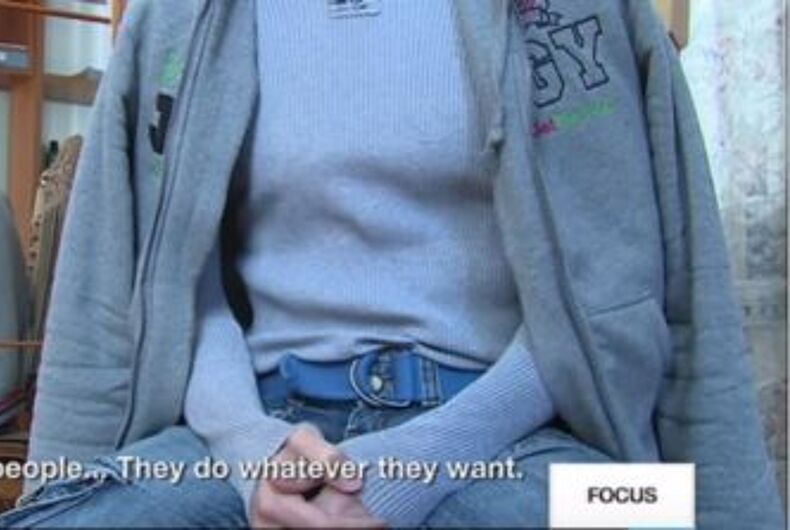 A survivor of the Chechnya prison camp describes his experiences. Photo: Screenshot/France

26 gay and bisexual men have been killed in Chechnya because of their sexual orientation, reports Novaya Gazetta, the Russian newspaper that broke the story about the abuses in the region. It has been picked up and covered in English by Crime Russia.

One of those killed is said to have been a member of the Rosgvardia, Russia’s National Guard. The Rosgvardia has denied the claim.

The paper turned over information to the investigative group of the central office of the Investigative Committee of Russia (ICR), headed up by Igor Sobol, the Deputy Head of the Office of Investigations of the ICR in the North Caucasian Federal District. They are in a pre-investigation check stage in the proceedings.

Police officials continue to deny any wrongdoing, and Chechen leader Ramzan Kadyrov is not cooperating in the investigation as he said he would. Police have only come forward under the threat of arrest, and maintain that there has been no abuse and no extrajudicial killings. At least one of the police officials responsible for covering up the crimes, according to survivors, reported feeling too ill to cooperate with the investigation.

Kheda Saratova, a member of the Human Rights Council (HRO), who has been critical of the reporting of abuses, also claimed to be too sick to cooperate.

Magomed Dashaev, the head of the Grozny police, declared that gay and bisexual men were safe.

“Nobody will touch them now, even if parades are held in the center of Grozny,” he said.

The building in Argun where victims were being held was investigated, and found to be how survivors described it, except it had been buried in rubble.

According to Novaya Gazetta, the men were transferred to the Russian Special Police Force base Terek, which investigators have not inspected. Relatives of victims and fugitives are said to have been told by police to sign a statement that “their son (or brother) (full name) left the republic to work in Moscow in late February. There are no claims to the Chechen police.”

Russia’s Human Rights Ombudsman Tatyana Moskalkova recently said she would go to Chechnya to check on the reports of abuses.

“I will go as soon as I form a documents’ package that is necessary for a dialogue with the authorities,” she said.