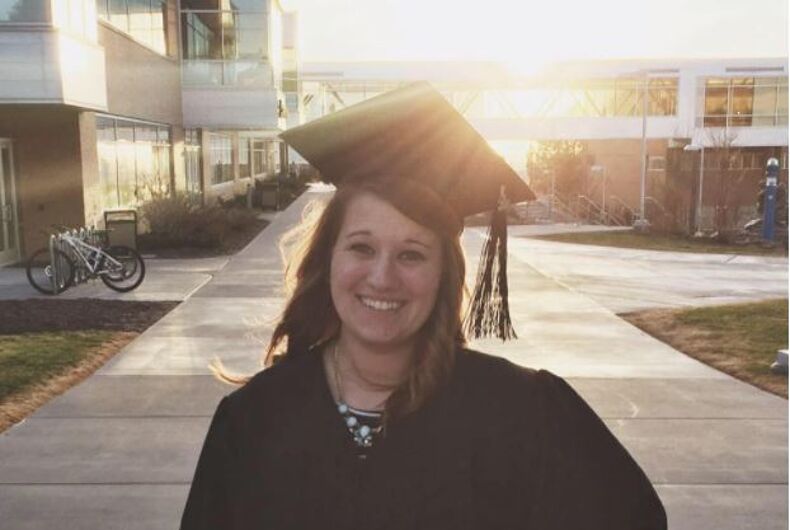 Ruthie Robertson stood up for the LGBTQ community and it cost her her job.

A lifelong Mormon who spoke out in support of the LGBTQ community in a Facebook post has been fired from her job as an adjunct professor of political science at Brigham Young University-Idaho.

Ruthie Robertson posted to Facebook on June 5 in honor of pride month, prefacing her remarks with the disclaimer that she was not speaking on behalf of her employer or her church. She added that she never discusses the topic in her classroom, other than to say that everyone deserves respect.

Still, her comments were enough to get her fired when she refused to retract them, news station KUTV reports.

Robertson told KUTV she “always had an issue with religions policies on LGBT, but felt comfortable” with her personal stance until the policy banning baptism for the children of gay parents leaked two years ago. Robertson said she has “been struggling ever since — but still remains a member of the church, and holds a temple recommend.”

Robertson reports being called into a meeting with the school’s administration as soon as the post, which criticized the LDS church for fighting against LGBTQ rights, went viral.

“Because that “sin” is part of who that person is,” she wrote.

“Most Christian faiths label homosexuality as a sin based on archaic writings A few hateful verses in the Old Testament have led to hundreds of years of prejudice, hatred, violence, and pain. If we’re going to follow the Old Testament, and use it to justify a hateful stance, there are several other things we need to start condemning and punishing,” she continued, citing a verse condemning wearing clothes of blended fibers, as well as some degrading to women.

Robertson refused to denounce the post, saying she “could not take it back.”

While she was allowed to finish out her summer course, but her contracted classes for fall and winter semesters have been cancelled, she has reported.

Maya Rudolph’s Ivanka Trump impression will leave you in stitches