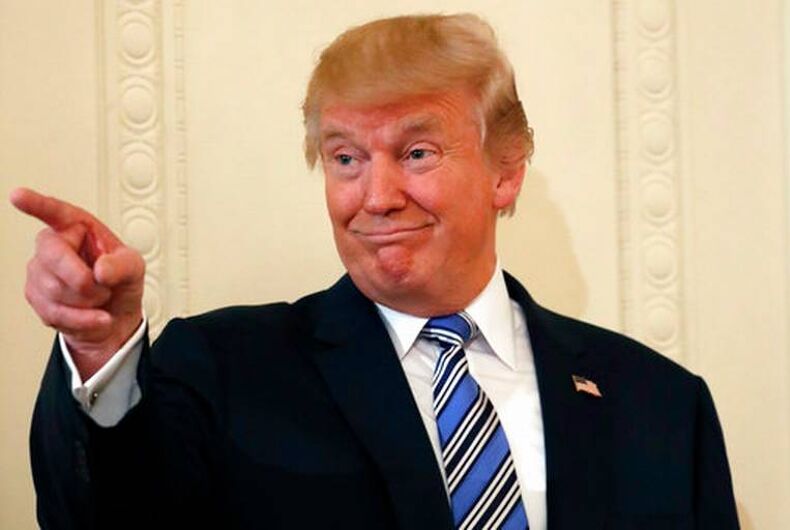 The latest on the Republican effort to repeal and replace the Affordable Care Act (all times local). We’ll update the post as necessary.

Trump told reporters during a lunch with service members Tuesday that Republicans have been talking for years about repealing and replacing “Obamacare,” and is disappointed they couldn’t deliver.

Trump says it’s time to “Let Obamacare fail,” and says that “I’m not going to own it.”

He says letting Obamacare fail will encourage Democrats to come to the table and negotiate.

Trump also says he does not blame Majority Leader Mitch McConnell for the decision by two more Republican senators to come out against the legislation, effectively killing the bill.

Republican Sen. Lisa Murkowski of Alaska has announced she will oppose moving forward on an “Obamacare” repeal bill — leaving Republicans once again short of votes.

McConnell was urging senators to advance to debate on a repeal-only bill on “Obamacare.” That was after his earlier repeal-and-replace bill was killed Monday by opposition from Republican senators.

Tuesday’s development marked the third straight defeat for McConnell as he struggles to make good on longstanding GOP promises to get rid of “Obamacare.”

Vice President Mike Pence says Congress needs to “step up” and “do their job” in the aftermath of the Republican health care plan’s failure to win consensus in the Senate.

Pence said in a speech to the National Retail Federation on Tuesday that the Senate should vote to repeal the so-called Obamacare law and replace it with a new plan. Or he says it should return to the “carefully crafted” legislation in the House and the Senate.

But Pence says “inaction is not an option” and Congress needs to act to address health care.

Pence spoke shortly after President Donald Trump tweeted late Monday that Republicans should repeal the law and work on a new health care plan “that will start from a clean slate.”

At least two Republican senators say they can’t vote to repeal the health care law without a replacement.

West Virginia Sen. Shelley Moore Capito said in a statement Tuesday that she “did not come to Washington to hurt people.” She said she had reservations about the GOP health care plan to erase much of Barack Obama’s health care law. Her concerns focused on proposed cuts to Medicaid and the impact on treating the opioid epidemic, which has hit her state hard.

Separately, Maine Sen. Susan Collins also said she opposes the repeal and delay approach. Collins said it’s not constructive to repeal a law so interwoven within the health care system and then hope over the next two years to come up with a replacement.

Majority Leader Mitch McConnell needs at least 50 votes to move ahead. With Capito and Collins’ objections, he can’t afford another defection.

The Kentucky Republican is conceding that his party’s prized legislation erasing big chunks of the 2010 statute and replacing it with GOP-favored programs won’t succeed. He spoke Tuesday, the morning after the GOP bill collapsed under opposition from Republican senators.

McConnell says his chamber will vote in coming days on legislation dismantling much of Obama’s law that would take effect in two years. He says that would give lawmakers time to craft a replacement.

The prospects for that bill seem doubtful. Democrats oppose it and many Republicans agree, worrying that a two-year gap would roil insurance markets and be politically damaging to the GOP.

Speaker Paul Ryan says he would like to see the Senate “move on something” after the collapse of GOP plan to repeal and replace the health care law.

Ryan told reporters on Tuesday that the House is proud of the bill they passed in early May and is waiting to see what Senate can do.

Senate Majority Leader Mitch McConnell, faced with defeat on his repeal and replace plan, is pushing ahead with a repeal and delay effort but faces uncertainty in getting that done.

Ryan said he was “worried Obamacare will stand” and repeated that the law is failing.

Ryan said, “We’d like to see the Senate move on something … We’ve got a promise to keep.”

President Donald Trump is calling for a 51-vote majority in the Senate instead of the current 60 votes as a means for getting individual pieces of legislation passed without the threat of a filibuster.

The president tweeted Tuesday, “The Senate must go to a 51 vote majority instead of current 60 votes. Even parts of full Repeal need 60. 8 Dems control Senate. Crazy!”

Trump’s health care bill suffered its latest blow after two GOP senators — Utah’s Mike Lee and Jerry Moran of Kansas —announced Monday that they would vote “no” in a critical vote.

At least four of the 52 GOP senators were ready to block the measure — two more than Majority Leader Mitch McConnell had to spare in the face of unanimous Democratic opposition.

President Donald Trump is blasting Democrats and “a few Republicans” over the failure of the Republican effort to write a new health care law. “We will return,” Trump declared in an early morning tweet.

The president tweeted Tuesday that “Most Republicans were loyal, terrific & worked really hard,” but says, “We were let down by all of the Democrats and a few Republicans.”

He added, “As I have always said, let ObamaCare fail and then come together and do a great healthcare plan. Stay tuned!”

At least four of the 52 GOP senators were ready to block the measure — two more than Majority Leader Mitch McConnell had to spare.

The implosion of the Senate Republican health care bill leaves a divided GOP with its flagship legislative priority in tatters. And it confronts a wounded President Donald Trump and congressional leaders with difficult decisions about addressing their seven-year-old promise of repealing President Barack Obama’s law.

Two GOP senators — Utah’s Mike Lee and Jerry Moran of Kansas — sealed the measure’s doom late Monday when each said they would vote “no” in an initial, critical vote that had been expected as soon as next week. Their startling announcement meant at least four of the 52 GOP senators were ready to block the measure. That’s two more than Majority Leader Mitch McConnell had to spare in the face of a wall of Democratic opposition.