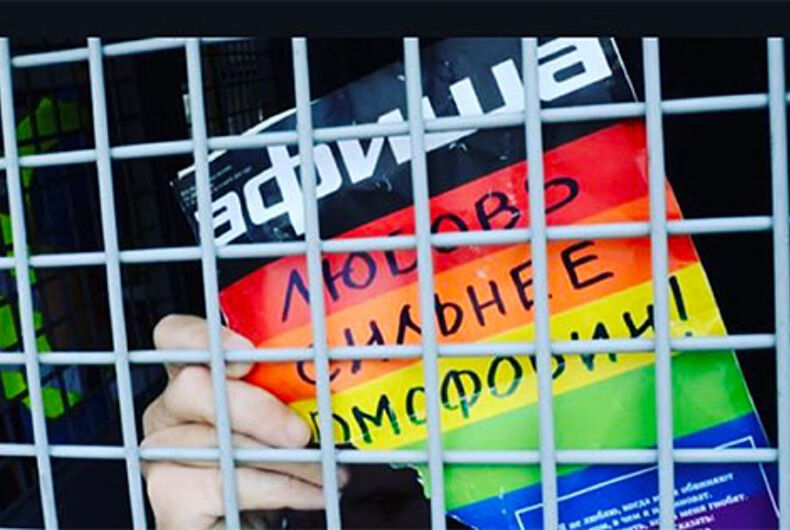 A man arrested by police holds up a sign that says "Love is stronger than homophobia"Photo: BBC

As the world awaits the first summit meeting between Donald Trump and Vladimir Putin beginning tomorrow, a Russian hotline says a new wave of illegal arrests of gay and bisexual men is underway inside the Russian-controlled republic of Chechnya.

Enrique Torre Molina of All Out sent the news in a press release, via email, citing “credible reports:”

People from Chechnya contacting the Russian LGBT Network hotline are reporting that arrests of gay men have resumed.

Nearly 100 days ago, news broke of Chechnya’s anti-gay purge. Over 100 men were hunted down, arrested, imprisoned, and tortured by state authorities, because they were believed to be gay. At least 6 were murdered. Others were returned to their families barely alive, with their captors encouraging relatives to carry out honour killings.

The Russian LGBT Network and All Out call on G20 leaders to demand that President Putin order a full and immediate end to the arrest of gay men in Chechnya. And that G20 leaders pressure President Putin to conduct a full, independent and impartial inquiry into the abuses that have already taken place.

“Citizens from across the G20 nations have already come together in solidarity, signing petitions in their millions and donating generously to support survivors,” said Matt Beard, Executive Director of All Out, in the email. “It is now time for world leaders to step up to the plate and send Putin a firm and unequivocal message that human rights violations against the LGBT community in Chechnya must end immediately.”

“My colleagues and I have seen first hand the pain and suffering of those who have survived the horror of illegal arrest and torture,” said Igor Kochetkov of the Russian LGBT Network. “Russia is failing in its responsibility to allow its own citizens to live in safety and has also failed to hold anyone to account for the appalling abuses that have already taken place. We urge G20 leaders to stand on the right side of history and do their part to help protect innocent civilians in Chechnya.”

So-called official investigations by Chechnya and Russia have turned up no evidence of these atrocities. At one point, Chechnya denied there could be such a round-up given that there were no gay or bisexual men in Chechnya. And as of press time, not one reporter has asked President Trump to address these arrests and murders nor has he made any statement about them, although there was a worthless condemnation by the House of Representatives and a statement by his ambassador to the United Nations.

Human Rights Campaign president Chad Griffin released an open letter of his own on the topic, and as LGBTQ Nation has reported, the group tweeted out a message encouraging followers to send an email urging Trump “to protect human rights at home and abroad.”