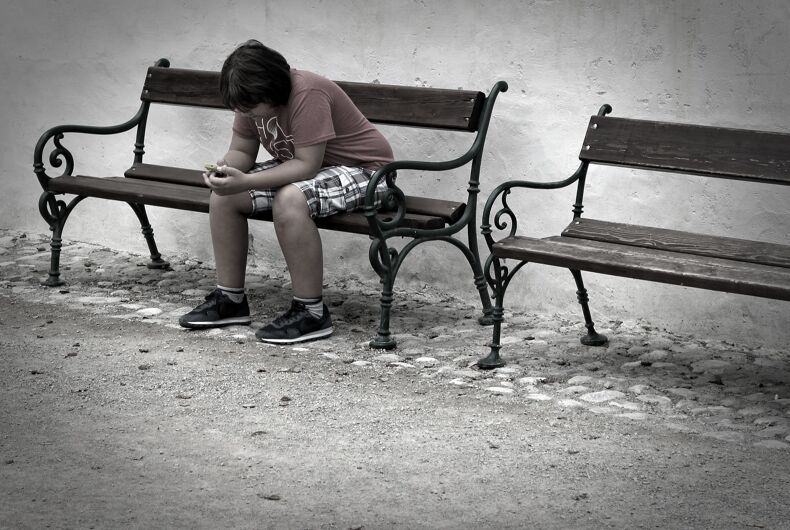 The LGBTQ community was enjoying a growing wave of support, although admittedly it had a long way still to go. Marriage equality had been won, nondiscrimination ordinances were becoming more common, and it appeared as if the momentum was on our side.

Then America elected Donald Trump to become our 45th president. Since then, that progress has looked more in danger than it has in years. For younger people, the turn can be particularly upsetting.

Related: After 2 years of marriage equality, Republicans are still trying to destroy it

“After the election it became clear to me that young people needed our help more than ever,” reports Amit Paley, the new CEO of The Trevor Project, whose suicide prevention hotline has seen a noted increase in call volume. LGBTQ youth attempt and commit suicide at a higher percentage than their heterosexual and cisgender peers.

“The day after the presidential election the Trevor Project’s call volume doubled, and there has been an increase in calls since then,” he said.

In May, Paley reported, The Trevor Project’s Lifeline received more calls than in its entire 19-year history.

“The policies of this administration, no doubt about it, are directly harming young LGBTQ people,” Paley told The Daily Beast. “What’s so upsetting and shocking for them is that up until this point they had been growing up in a time of increasing acceptance and tolerance. Our mission is to end suicide among LGBTQ young people, and we are concerned by any activities that might reverse the progress we have made.”

“There are more people feeling in crisis and more people reaching out for help,” said Paley. “When the president of the United States and politicians in positions of power stand up and make LGBT people feel less-than, or make them feel their rights are being taken away from them, that has a significant impact on their self-worth.

“That’s our reason to be here: to say, ‘No matter what anyone in Washington says, you are worthy, you are loved, you have dignity, and you are who you are and who you love does not lessen you as a person.’”

The attorney general in California, where The Trevor Project is based, recently announced that hate crimes had increased by double-digits for the second consecutive year, with gay men as one of the main groups targeted.

“Words matter, and discriminatory rhetoric does not make us stronger but divides us and puts the safety of our communities at risk,” Attorney General Xavier Becerra said in a statement.

Related: Is this the end of the LGBTQ movement as we know it?

The Trump administration has rescinded transgender student protections concerning bathroom and locker room use in public schools, civil rights enforcement is being weakened throughout the federal government, the president’s proposed budget slashes HIV/AIDS funding by $300 million, and he failed to issue a pride month proclamation.

States have also upped their attacks on the LGBTQ community, such as in Texas, where the state’s Supreme Court ruled unanimously that same-sex couples don’t necessarily deserve the same rights as their opposite-gender counterparts, and where a bathroom bill like North Carolina’s HB2 could become law over the Republican House speaker’s concerns.

In fact, Texas House Speaker Joe Straus has said he “doesn’t want a suicide on his hands” over the bill.

Speaking of North Carolina, while they repealed HB2, its replacement, HB142, is no better and maintains the status quo of anti-LGBTQ discrimination that has made the state famous in recent years.

The entire profile of Paley by The Daily Beast is well worth the read.

If you are experiencing depression or thoughts of suicide, you can call The Trevor Project’s Lifeline, available toll-free, 24-hours, at 1-866-488-7386.