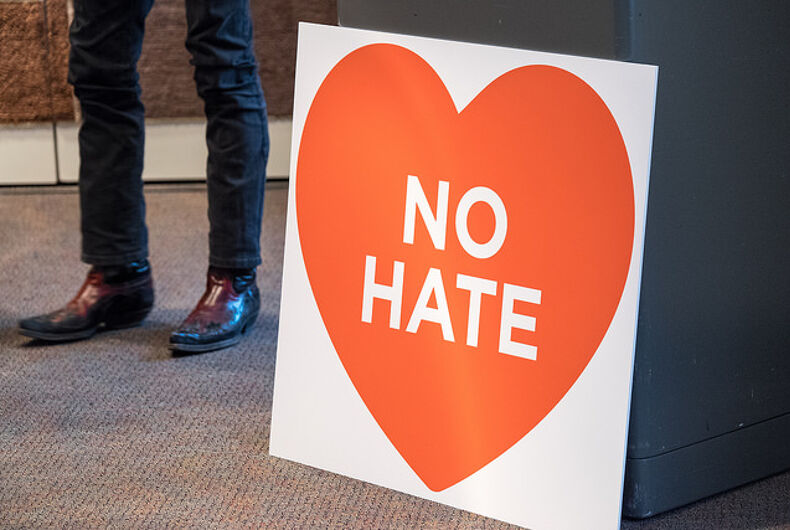 Hate crimes are up by double digits for the second consecutive year in California, the state’s attorney general announced this week.

Gay men, as well as Jews and black people, were among the most targeted groups. Statewide, 931 hate crimes were reported in 2016, almost 100 more than in the previous year, the Associated Press reports.

Almost two-thirds of those crimes were violent, whereas the rest involved property damage. More than 300 cases last year were turned over to county prosecutors, with charges filed in 220. At year’s end, 80 percent had resulted in convictions.

There was an increase in anti-LGBTQ hate crimes of about 10 percent, with most of those targeting gay men.

Overall, most hate crime cases involved discrimination based on religious views and race, making up more than half of the incidents.

The overall trend is still down, however. In 2007, there were 1,426 hate crimes reported, and that’s with approximately 3 million fewer people residing in the state at the time.

“The good news is we have a lower number of hate crimes than we have in the past. The bad news is the trend is up,” criminologist Brian Levin, a former New York City police officer who directs the Center for the Study of Hate and Extremism at California State University, San Bernardino said. “People feel disenfranchised, and there’s a tribalistic tone that has come out.”

He also theorized that gay men could be suffering more abuse due to a backlash to LGBTQ issues being in the news more often these days.

President Donald Trump has been blamed by many victims advocates, Democrats and progressives for the increase in violence. He encouraged and provoked violence at his campaign rallies, despite a recent lie to the contrary from deputy White House press secretary Sarah Huckabee Sanders that he has “never promoted or encouraged violence.”

Related: Trump’s Twitter attack on MSNBC hosts even has Republicans begging him to stop

“Words matter, and discriminatory rhetoric does not make us stronger but divides us and puts the safety of our communities at risk,” Attorney General Xavier Becerra said in a statement.

What this congressman did when he visited Auschwitz is unbelievable

Who are our greatest allies? They’re not white