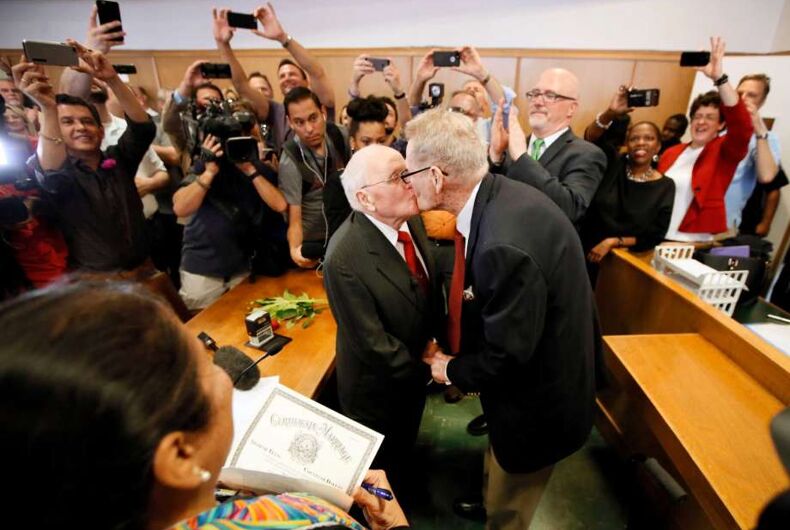 The Texas Supreme Court ruled on Friday that it might not be necessary to provide married same-sex couples with the same benefits as their opposite-sex counterparts.

In a unanimous decision, the court reversed a lower court’s ruling in favor of Houston’s decision to extend spousal benefits to the same-sex spouses of city employees, arguing that the “reach and ramifications” of the rights of gay couples have yet to be determined, The Dallas Morning News reports.

The case has been sent back down to the lower court, so that it may clarify this so-called “open question.”

In truth, there is no open question.

Notably, President Trump’s appointment to the court, Justice Neil Gorsuch, voted against those rights, and even wrote the dissenting opinion. Gorsuch called same-sex marriage “settled law” but has shown that he, like the Texas Supreme Court, is willing to cut the legs out from under it, until it scarcely resembles marriage.

In fact, Republican-led efforts to undermine marriage equality are taking place across the country.

“The Texas Supreme Court’s decision this morning is a warning shot to all LGBTQ Americans that the war on marriage equality is ever-evolving,” said Sarah Kate Ellis, president of GLAAD. “Anti-LGBTQ activists will do anything possible to discriminate against our families.”

“The Texas Supreme Court’s opinion today in the Pidgeon case clings to unconstitutional notions of ‘separate but equal’ that were long ago laid to rest in this nation,” said Equality Texas in a statement. “The justices’ holding that Obergefell v. Hodges does not require equal treatment under the law for LGBT married couples is patently indefensible. This is a sad day for Texas as our highest court joins the ranks of Mississippi and Arkansas in refusing to abide by the Constitution’s mandate to recognize the dignity and equality of all persons. Equality Texas is hopeful that the City of Houston will appeal this horrendous decision to the United States Supreme Court in order to ensure equality for the marriages of all Texans.”