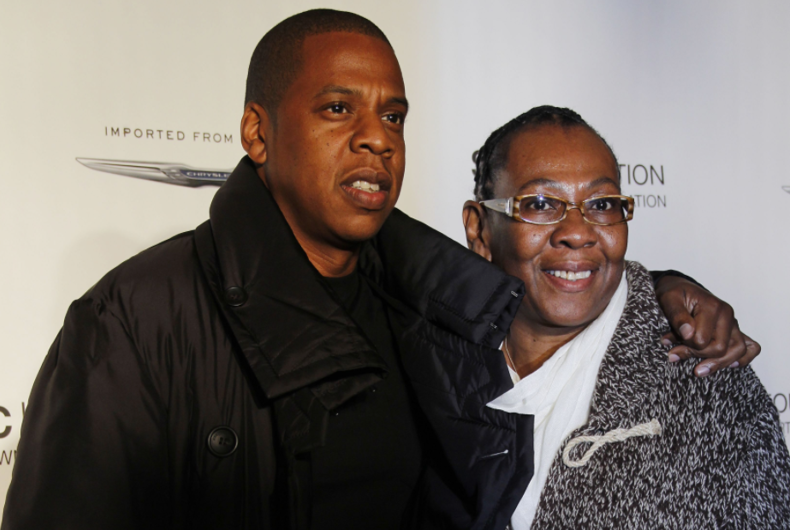 Rapper Jay-Z just dropped his first album in four years, 4:44, and everyone’s talking about the the record’s big reveal — that his mom, Gloria Carter, is a lesbian.

This isn’t exactly breaking news. Gossip mags reported Carter was in a same-sex relationship with Dania Diaz, executive director of Jay-Z’s Shawn Carter Foundation, as early as 2013. But in the duet with her son on the track “Smile,” Gloria comes out publicly and shares her story in her own words.

Jay-Z sets it up early in the song, talking about the struggles his mother faced in the closet.

Mama had four kids, but she’s a lesbian
Had to pretend so long that she’s a thespian
Had to hide in the closet, so she medicate
Society shame and the pain was too much to take
Cried tears of joy when you fell in love
Don’t matter to me if it’s a him or her
I just wanna see you smile through all the hate
Marie Antoinette, baby, let ’em eat cake

And Gloria adds her own take in a spoken word outro.

Living in the shadow
Can you imagine what kind of life it is to live?
In the shadows people see you as happy and free
Because that’s what you want them to see
Living two lives, happy, but not free
You live in the shadows for fear of someone hurting your family or the person you love
The world is changing and they say it’s time to be free
But you live with the fear of just being me
Living in the shadow feels like the safe place to be
No harm for them, no harm for me
But life is short, and it’s time to be free
Love who you love, because life isn’t guaranteed
Smile

Jay-Z and Beyoncé have been vocal supporters of marriage equality and LGBTQ rights.

In a 2012 interview with CNN, Jay-Z compared anti-gay bigotry to racism.

“I’ve always thought [not allowing gay couples to wed] as something that was still, um, holding the country back,” Jay-Z said. “What people do in their own homes is their business and you can choose to love whoever you love. That’s their business. [It] is no different than discriminating against blacks. It’s discrimination plain and simple.”

Listen to “Smile” below.