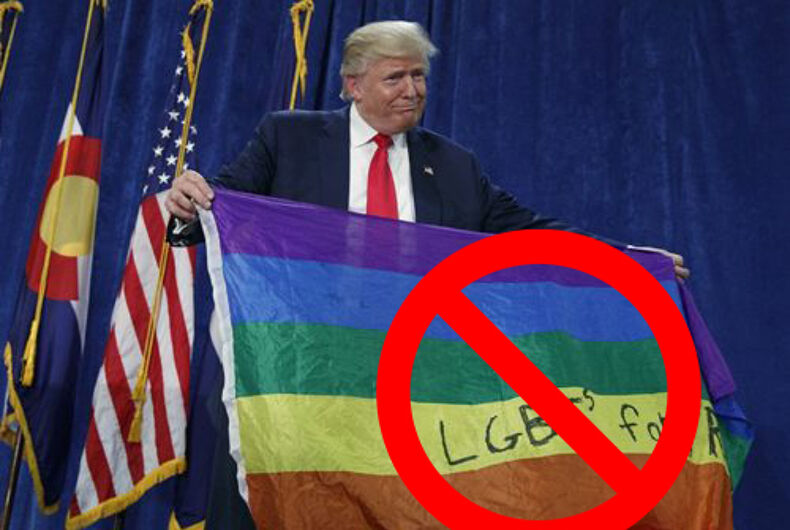 It became clear early that were Donald Trump elected president, he might not continue the tradition of issuing a pride month proclamation. When asked on the campaign trail if he would do as then-President Barack Obama had done in every year of his presidency, he said he’d consider it.

June came and went, and while the outdoors, home-ownership, the oceans, and African-American music all got symbolic love, LGBTQ pride went ignored.

For a man who name-checked the LGBTQ community in his Republican National Convention speech, albeit in the context of stoking up fears over Islam, and who later held up an “LGBTs for Trump” tagged rainbow flag, albeit an upside-down one, it was almost surprising that he didn’t issue a pride month proclamation.

That’s what the name-checking, and the flag-waving was all about: Trying to convince more socially-liberal conservatives and younger voters, who tend to lean left on the issue, that he was going to be a president for all people.

Sure, it’s not believable to most, but that doesn’t mean it isn’t convincing to many, including some in the LGBTQ community.

The Log Cabin Republicans failed to endorse Trump during the campaign due to his surrounding himself with anti-LGBTQ advisers, but since his election the group has been more approving.

When we asked for a statement about Trump’s failure to make a pride month proclamation back in early June when it became clear that one was likely not forthcoming, the Log Cabin Republicans balked, saying it wasn’t available to comment.

On Monday, we reached out again, and will update this report if they respond.

It’s easy to say, “Trump didn’t make a pride month proclamation? Good, we don’t need him!” and indeed many have, both on social media and in think pieces.

Yet the lack of a proclamation should be disquieting to LGBTQ rights advocates.

It is another sign, like the decision to leave the Paris Accords, or the support for the Medicaid destroying Senate health care bill, or the proposed budget cutting $300 million from HIV/AIDS funding, that the right-wing forces in Trump’s administration are winning out against more moderate voices.

Meanwhile, Trump will meet with Russian President Vladimir Putin this upcoming week for the G20 summit; a man who Trump regularly praises and never criticizes, and who leads a country where it is illegal to hold an LGBTQ pride parade thanks to their 2013 so-called gay propaganda law.

While pride month may be over, LGBTQ pride continues, with or without Trump’s proclamation.

So get out in the streets and show your pride, and to resist attempts to move us backwards. Get out there, and with a vengeance, because you still can. Whatever the month.